A sequel to the fantastic game 60 Seconds..

A lot can be achieved in 60 seconds if you use the time wisely. However, never has a lack of time made me value the addition of a few extra cans of soup rather than the company of a fellow astronaut. Welcome to the hectic, punishing world of 60 Parsecs.

Out of this world overview

60 Parsecs is the newest instalment in the 60 franchise, a series of challenging survival games with a text-based main game. You find yourself in a space station accompanied by your crew. However, faced with an incoming nuclear attack, you have no choice but to gather what you can and make it to the shuttle hatch before it’s too late. 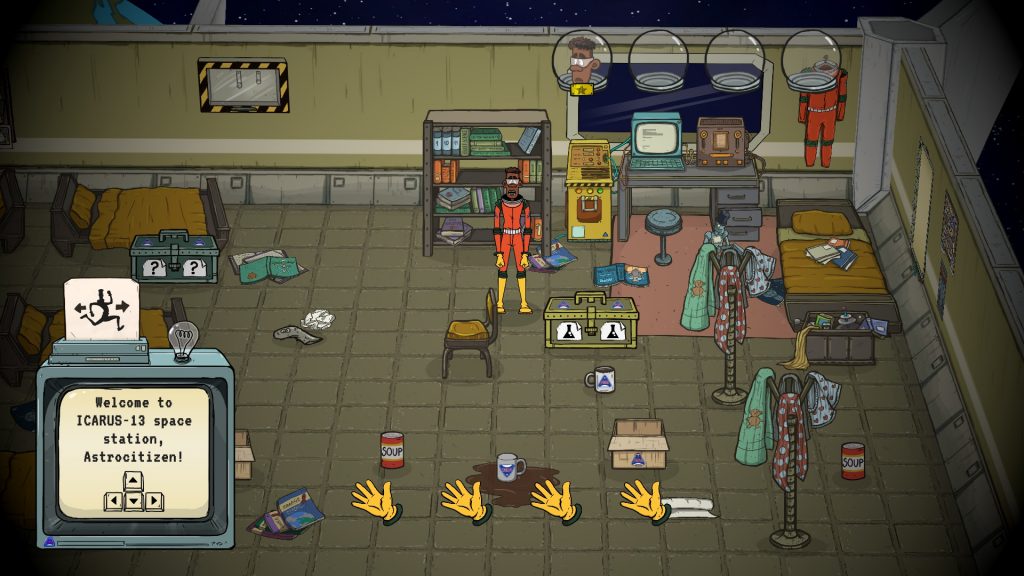 There are many items to choose from during the scavenging phase, which makes it challenging to pick up one of everything available. Running trail and error through a few playthroughs is the easiest way to gain an understanding of what items should be prioritised. However, to make it harder the scenarios you encounter in the main game are randomised with every playthrough. Making it difficult to predict what you are going to need.

Once you’ve made it safely off the space station, the real challenge starts. You have to use both your wits and the resources you’ve gathered to survive various perils to make it home in one piece. This is easier said than done, however, as rationing food is difficult and each day introduces a potential danger to your crew. 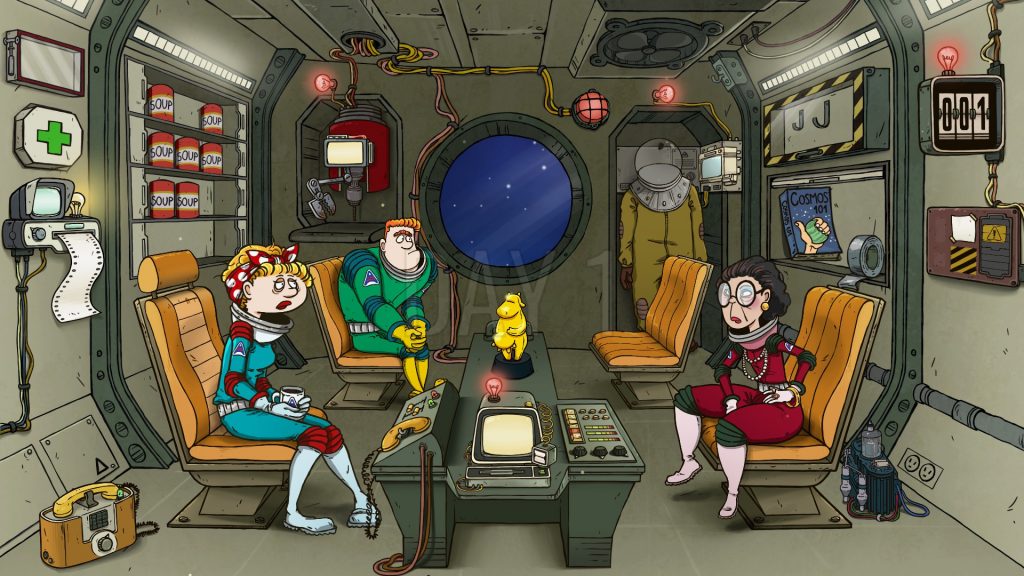 One of the very few forgiving features of the game is the crafting machine. It can be a godsend when you realise you’ve left the phone behind and only picked up four cans of soup. The machine can be used to upgrade, create, repair and scrap items. However, each feature requires a certain amount of resources to operate, so consider picking up resource boxes during your preparation phase.

The main menu might be my favourite part of the game. You are greeted with a fully interactive screen with certain parts reacting to the options you mouse over. In the corner, you have a space suit that represents the achievements tab. As you reach new milestones in the game and unlock achievements, small badges will appear on your suit to represent your commendations. It’s the small things that really add charm to a game, and 60 Parsecs is full of them. 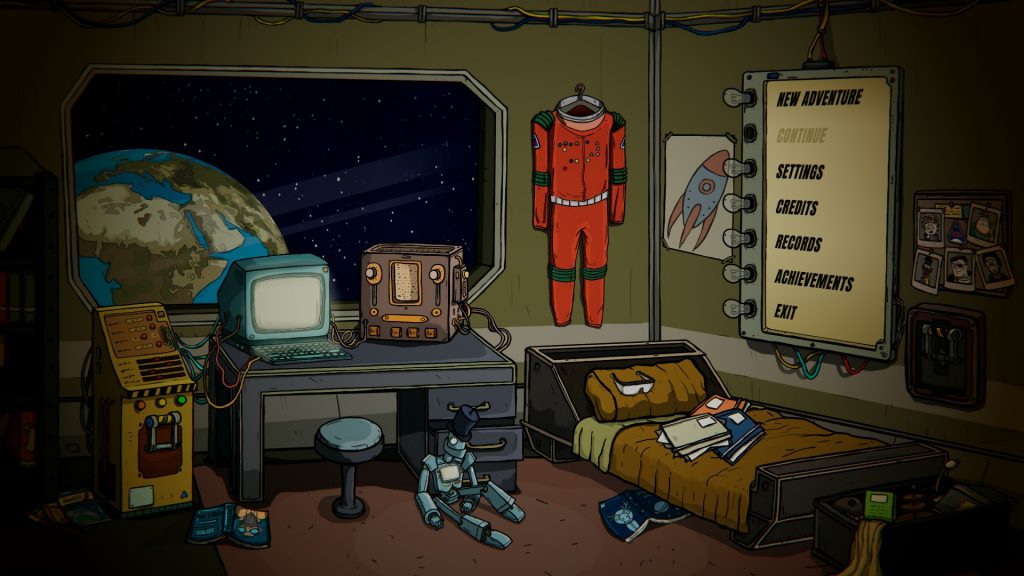 If you pay close attention, you’ll be able to spot heaps of easter eggs and references throughout the game. As always they’re a nice addition and give a nod to certain films, games and books that have inspired parts of the game.

These are just some of the aspects that really drew me into this game. From the get-go, you’re immersed in the universe and thrown in the deep end. Thankfully, the mechanics are easy to understand and you quickly learn which decisions not to make.

Reaching for the stars

60 Parsecs has a polished feel to it. It offers a variety of interesting features including; over thirty achievements and various game modes to hone your skills. Of course, new additions may be introduced in the near future, but there’s nothing missing from the game in its current state.

Robot Gentleman has also managed to revive a classic form of the game genre, text-based adventures. The narrative is exciting and well written with a good sense of humour laced in. It goes without saying that they have managed to breath new life into a much-loved style of story-driven gameplay. 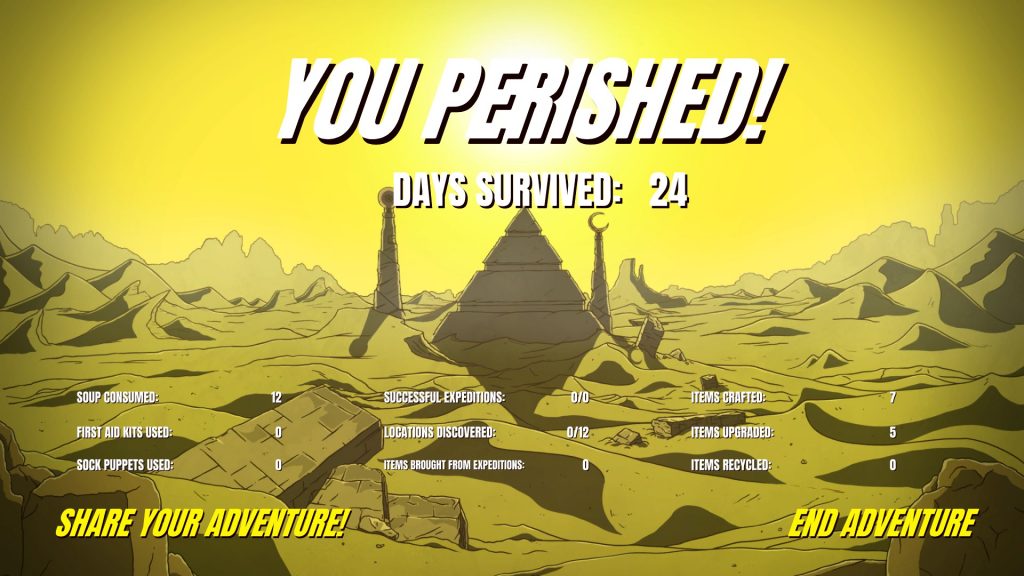 The end of the game summary is a really nice touch. It keeps track of resources used, exploration stats and your usage of the crafting machine. Paying attention to these stats can help improve resourcefulness and highlight features you could be using more.

For the most part, 60 Parsecs is hard to fault. At times it does feel slightly too punishing with the addition of new mechanics and dangers. On the other hand, perseverance and practice can see you through to success.

The only problem I encountered was a black screen bug part way through the game. As I moved onto the next day, the screen was left black instead of loading into the next scene. This can be quite frustrating as it sometimes prevents progress around the 30/40 day mark.

To round it up

All in all, Robot Gentleman have outdone themselves with 60 Parsecs. They have taken all the best parts from 60 seconds and improved them to make a refined and charming successor.  Additionally, I look forward to seeing what the future holds for in regards to new content.

With two successful survival games under their belt, there’s only one question left to ask. Where will the nuclear fallout strike next?

60 Parsecs is out on steam and available now!

I have a long history with everyone's favourite wall-crawler. Spider-Man has always been my favourite superhero. From his incredible 90s cartoon to the insanely...
Read more
Gaming

It was a fish, just one bright blue fish. But before I knew it, I was enthusiastically considering the repercussions of placing a family...
Read more
Gaming

I've been a fan of survival games for a long time. There's something satisfying about exploring, building and crafting whilst just trying to get...
Read more

I have a long history with everyone's favourite wall-crawler....
Read more
Gaming

It was a fish, just one bright blue fish....
Read more
Gaming

I've been a fan of survival games for a...
Read more
Gaming