Crafting is an integral part to any Bethesda game. Even more so in Fallout 4 with the introduction of Settlements, where you can now build multiple bases to defend and have settlers work at.

In this list, we’re going to look through some of the best Crafting mods currently available for Fallout 4 on the Xbox One. These mods don’t look at armor and weapons, instead they look at the whole crafting process.

You can do your crafting at any workstation in-game. There are multiple workstations available, depending on what you want to do. If you want to upgrade weapons, then you need a weapons bench, armor at an armor bench etc. A lot of mod items will usually fall under the chemistry workstation.

Whilst they can be found hanging around settlements and random locations in the game world, workstations can also be built in the settlement crafting menu. So make sure to drop some down in every settlement you own.

Crafting Mods for Fallout 4 are any mods that affect how you craft in-game. So anything that changes/adds new stations, changes how you modify weapons and armor or how you go about building your settlements. 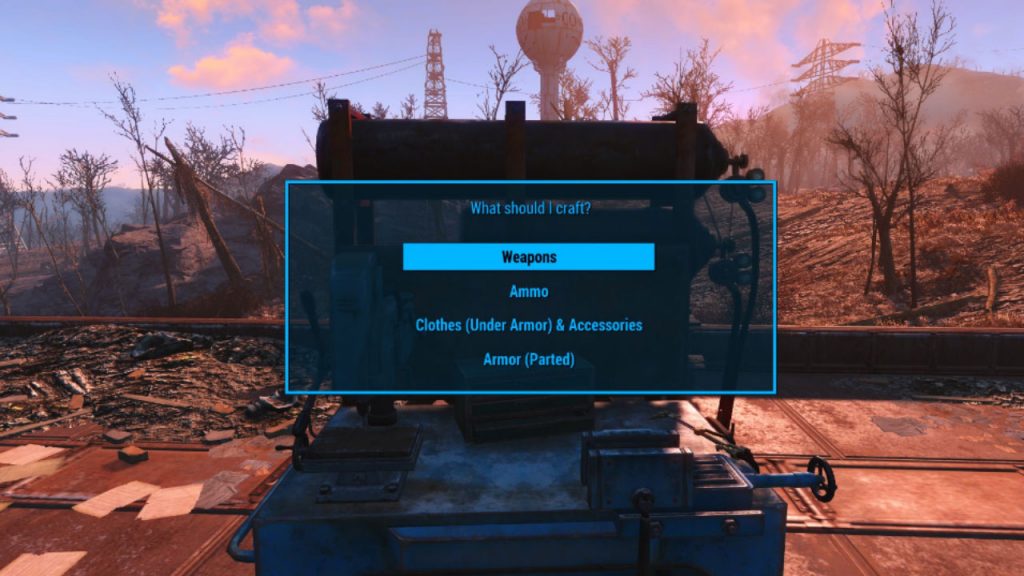 This mod adds a new workbench which you can craft at and use in Fallout 4 called the ‘Item Creation Workbench’. Inside, you can craft Legendary modifications, all guns that are in the vanilla version of the game (as well as adding weapons which where previously removed by Bethesda). You can also craft a lot of the clothe items, as well as ammunition and armor. It’s basically an all-in-one crafting mod! 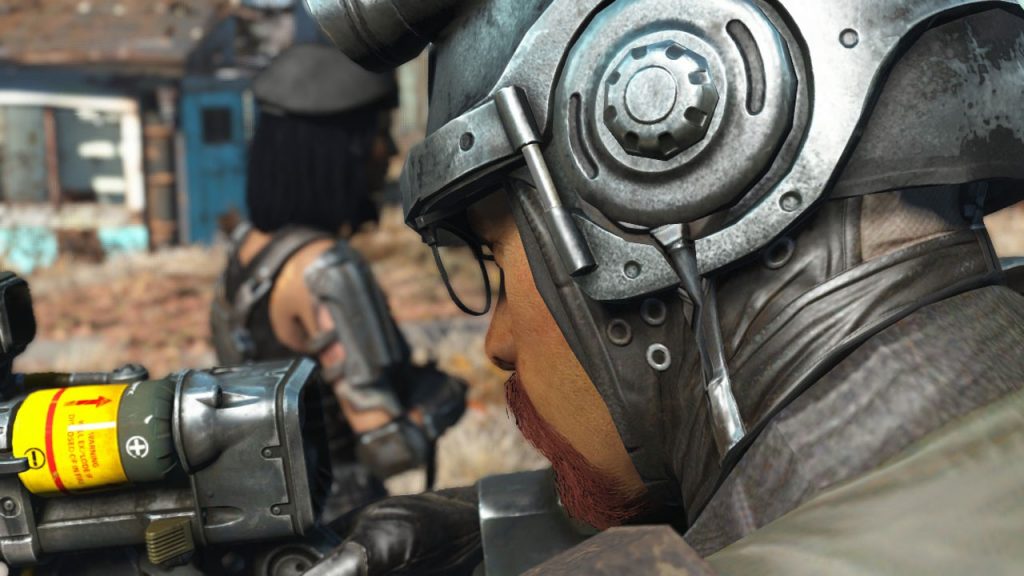 Next up is Armorsmith Extended, and this mod is a must-have for Fallout 4. It has a lot of features, but the main one is that is allows you to wear multiple types of armor at once, meaning you can wear glasses under a helmet, clothes under armor etc. It allows you to really design your character and make them more interesting. There’s a lot more to it such as crafting armor and clothes at stations, new materials, new mods and so much more, I recommend you read the description and don’t skip out on this one. 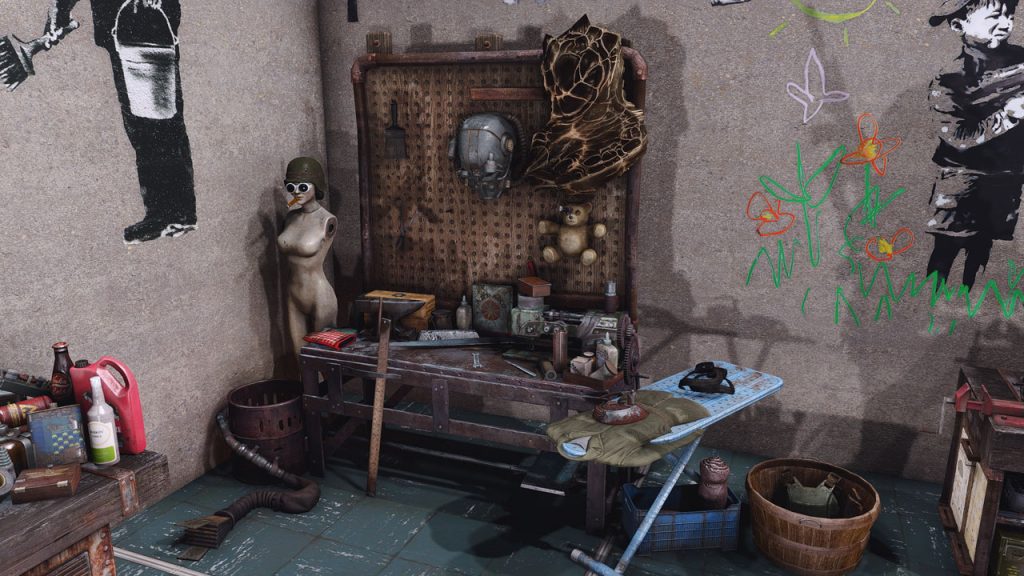 AWKCR is another must have crafting mod for Fallout 4. This mod standardises a lot of Fallout 4 to prevent conflicts for armor, weapons and more. There are also new workbenches, and new categories inside crafting stations to make everything just a little bit easier and more user friendly. A lot of other armor and weapon mods will require this to work. 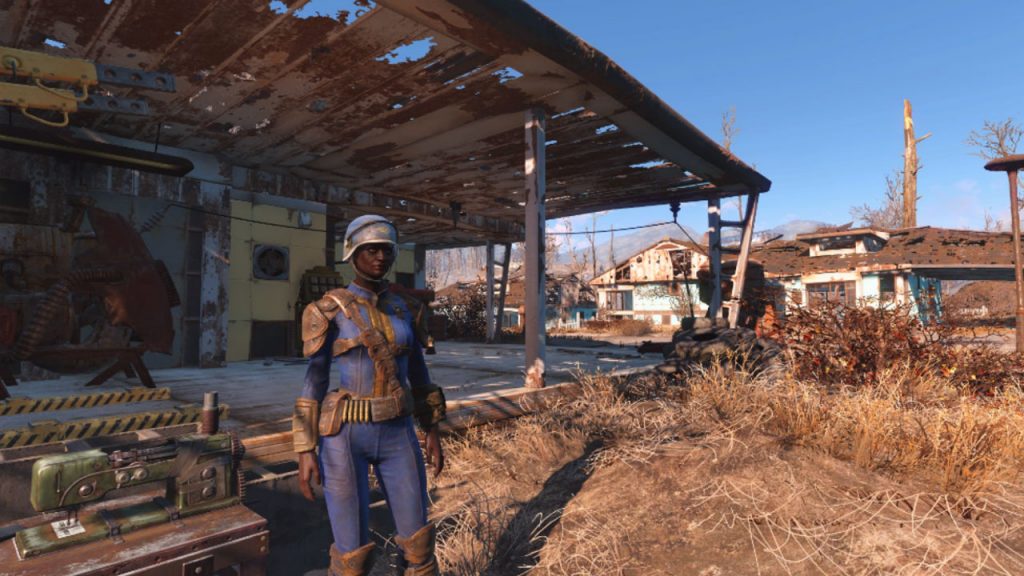 Vanilla Crafting Expansion allows you to change the weight of any armor items you own at a workbench. For example, you can take a legendary piece of armor that you own and convert it to be heavy, or sturdy instead. There is also a ballistic weave extension, where you can remove it from some armor, and then place it elsewhere. 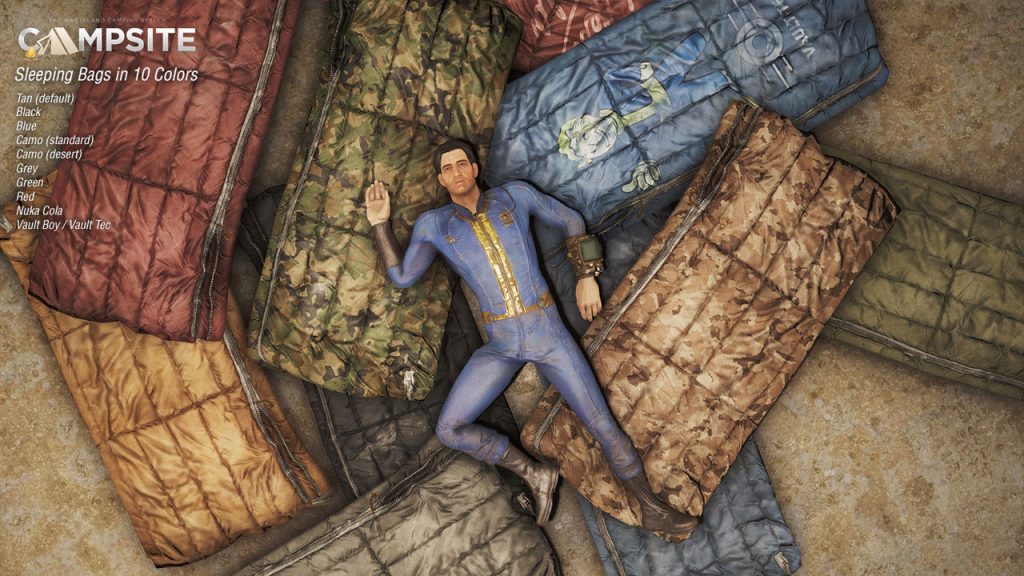 Whilst not necessarily focused around crafting, this Fallout 4 mod does allow you to do some crafting on the fly. The Campsites mod allows you to camp anywhere you want in-game, setting up a tent, sleeping bag, cloth walls and even a separate bed for dog-meat. It’s a must-have mod for anyone playing survival mode, and with the cooking pot, you can craft food items. 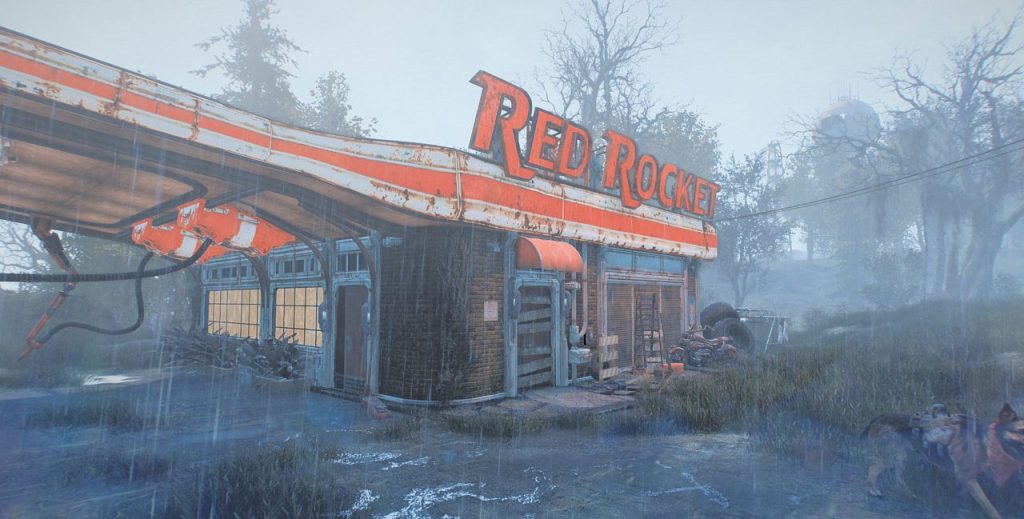 Finally, we have No Build Limit for Fallout 4. This mod removes the building limit that you have at any settlements, meaning you can craft as many furniture and structural items as you want. However be careful not to go too crazy, the limit was there for a reason, and that was to prevent bugs or lag when there’s too much stuff at a settlement. 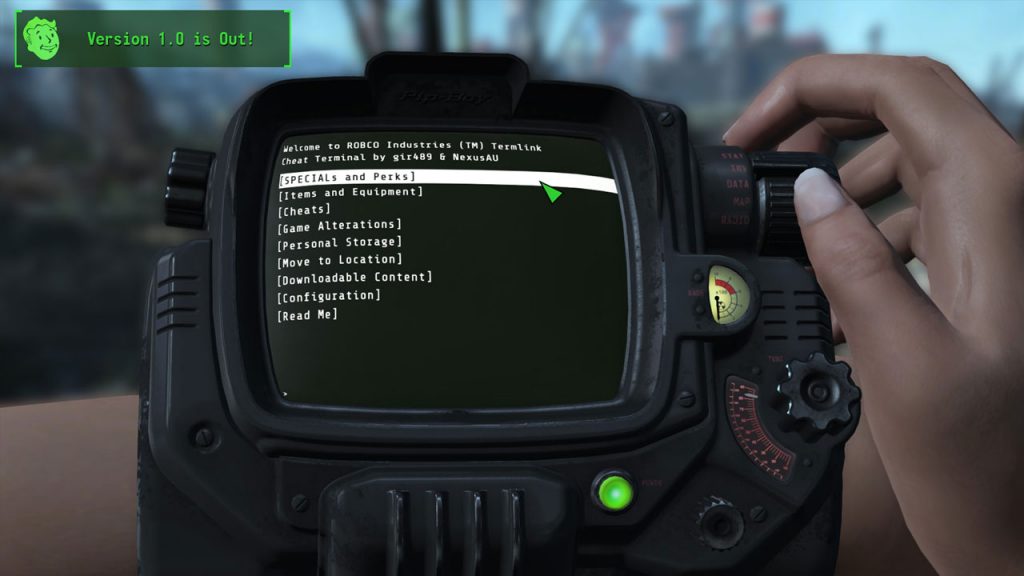 This next Crafting mod will aid you in Fallout 4 when it comes to Crafting, Settlement Building or just general gameplay. Once you’ve installed Cheat Terminal, a Holotape will be added to your inventory. Run it, and you will see the interface shown on the screenshot above. Here, you can spawn crafting materials, teleport around the map, enable cheats such as god-mode or change your perks. 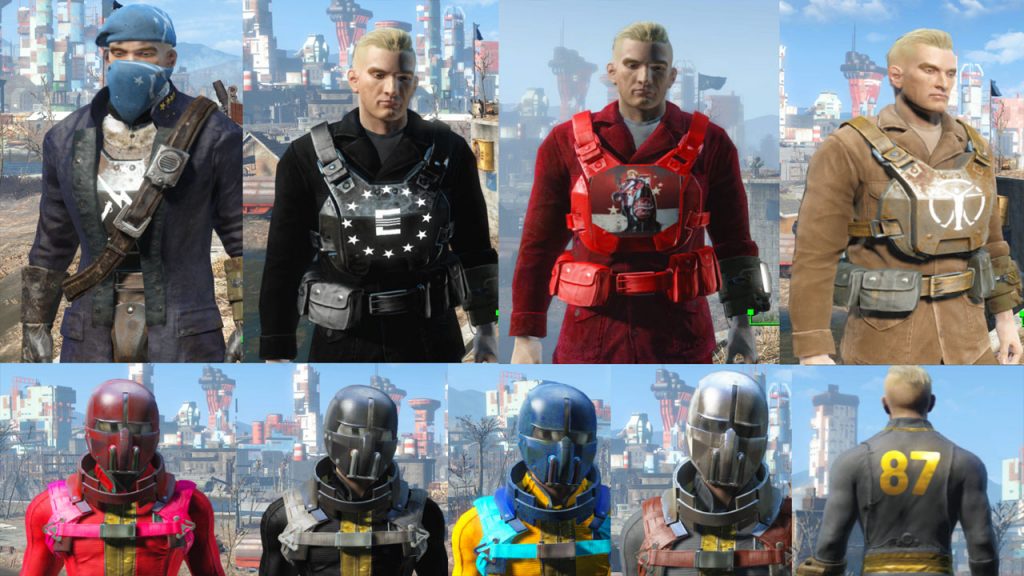 UCO (Unified Clothing Overhaul) gives you more options when it comes to customizing and crafting clothing, armor, costumes, weapons & ammunition. Some of it’s features include the ability to add Ballistic Weave to all armor items, layer armor pieces so that more items can be worn together, the option to change the color of most armor items and the ability to make some armor items invisible. 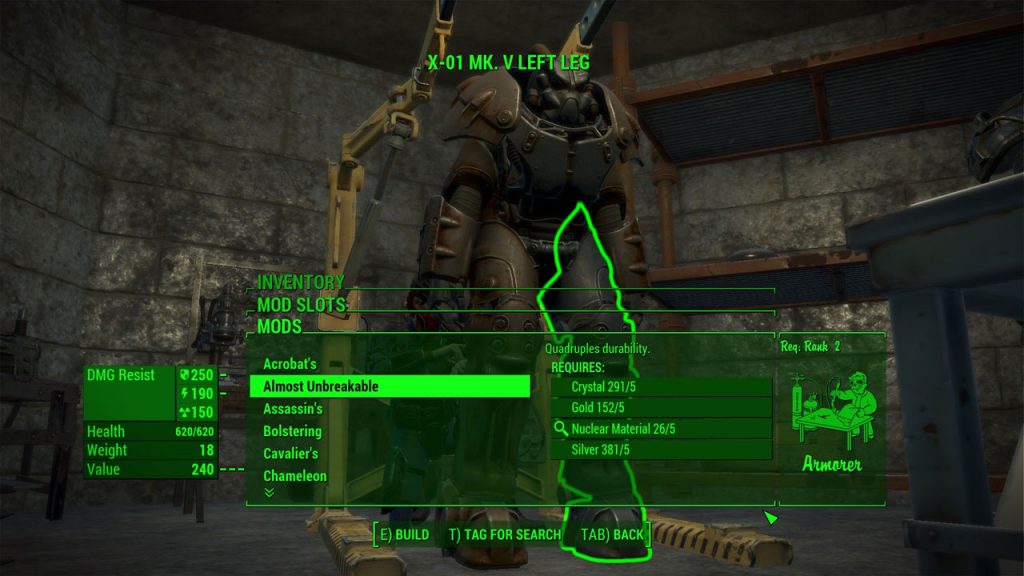 Legendary Modification changes a lot when it comes to crafting Weapons and Armor items in Fallout 4. With the mod installed, you will be able to craft your own Legendary Items at a Worbench, or apply a Legendary Modification to an existing item (as long as it allows it). There’s a lot to look at when it comes to balance with this mod, as it will likely make you quite overpowered.

Backpacks of the Commonwealth 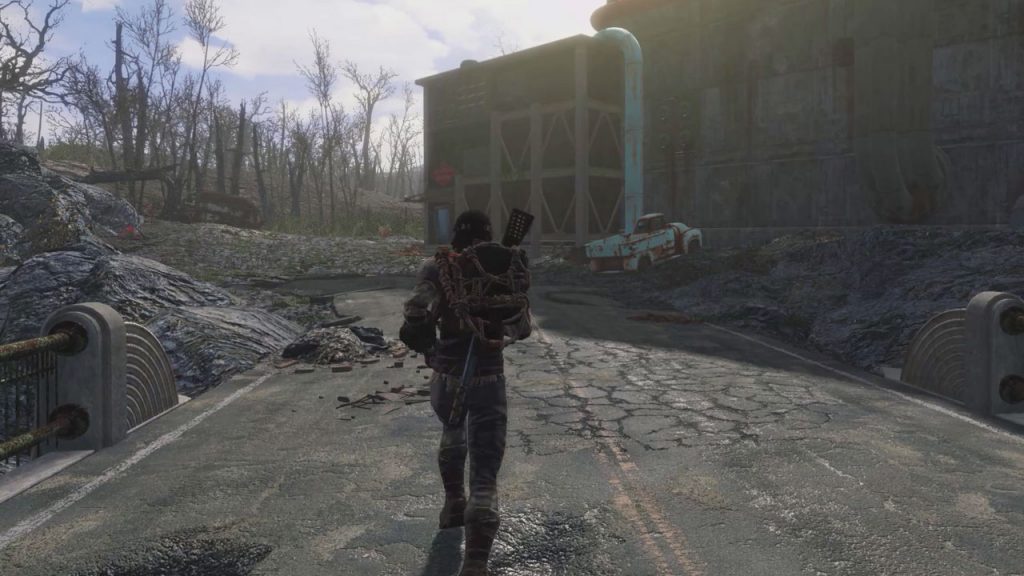 Our final crafting mod for Fallout 4 on Xbox One is Backpacks of the Commonwealth. It allows you to craft a Backpack, with their being 15 to choose from. From there, upgrade the Backpacks with over 50 Workbench mods or 40 different colors. Look for the 5 new magazines which provides perks to Backpacks. The Backpacks provide an immersive way to increase carry weight, and are a great addition to any play-through, but especially Survival Mode.

Visit Backpacks of the Commonwealth
READ:  Best Fallout 4 Armor Mods for Xbox One