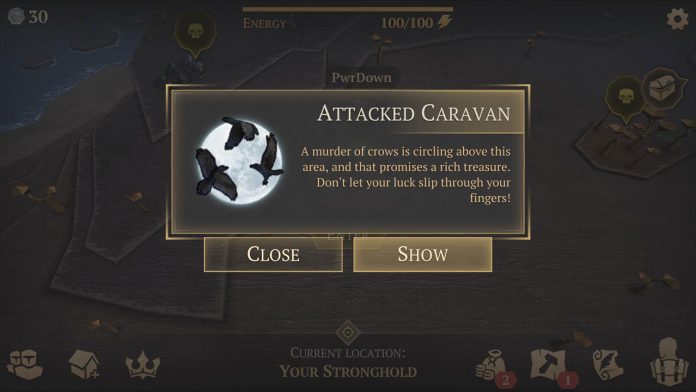 One of the best random events that happens in Grim Soul would have to be the Attacked Caravan. It’s a common event, and one that you really shouldn’t miss out on.

This event will trigger randomly, with an alert popping up to you (like on the image above) when entering the map view. You can head on over to this area at any level, however it is recommended that you gear yourself up slightly.

We have a guide for the Attacked Caravan event below, with what you can expect. If you’re interested, here at PwrDown we have more Grim Soul guides available!

As I said before, this event randomly triggers when you open the map. There is a timer on this event, and it will expire eventually. It’s unknown how long it could be until it pops up again.

How dangerous the area is likely depends on your level and how equipped you are. However, when I went, there was hardly an enemy in site. The image below shows the area on the map, with 1 skull areas around.

As the event name suggests, a trading caravan has been attacked. On the ground in the area is a lot of loot boxes, dead horses and destroyed caravans. It’s highly suggested that you build yourself a backpack of some sort, otherwise you’re going to have troubles.

The lowest tier backpack you can craft is the Rugged Sack, which can be made from pretty much level 1 and is really cheap. It gives an extra 5 inventory slots. In this area, there is well over 20 containers, more likely approaching the 30.

Although it’s unknown whether the amount of loot boxes that spawn is random right now. Either way, there is a lot. You will pick up lots of potions, candles, weapons and armor.

You will be attacked, although only around 3 enemies showed up for me. Make sure to search the entire area, as loot may be separated. You may also wish to leave the area, drop the loot back off at your base into chests and come back for the rest if time allows it.