How to fix lag & ping issues in PUBG

Playing competitive games such as PlayerUnknown’s Battlegrounds can be extremely frustrating if you’re suffering with high ping. It doesn’t matter if your an Xbox One or PC Player, ping can affect us all.

Hitting shots and tracing targets can be downright impossible with high ping, due to the response time between you and the server being low.

Ping can make a massive difference, someone who is suffering with 500 ping can expect half a second before their action is registered. Meaning if you fire a weapon, it’s not going to happen in game for half a second later, by which point it will probably miss.

If you have played League of Legends before, you’ll quite likely know what I’m talking about. Hitting skill shots becomes extremely difficult and you might even find your character teleporting.

One of the first things that you can check is that you are connected to the correct region in PlayerUnknown’s Battlegrounds. The option for this can be found at the bottom of the main menu.

I personally am based inside the UK, therefor it makes sense for me to connect to Europe servers where I get around 40 ping. If I was connected to North America though, I could expect around 150 ping at all times. 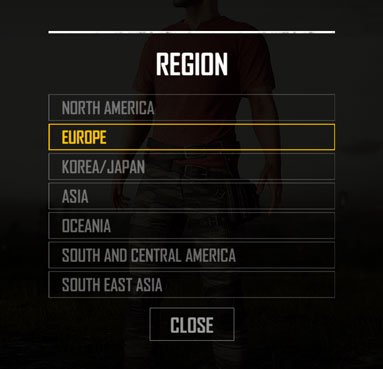 Make sure that there aren’t any programs running in the background using up your network. Some well known culprits include game clients, which are doing background updates such as Steam & Origin.

READ:  How to change your crosshair color in PUBG

Also check to see if you have any Torrent clients running. If not, go to a more extreme level. Close Streams, VOIP (Skype, Discord), Music streams and anything else requiring a constant internet connection.

Another effective fix would be to restart your router. Unplug it from the wall and count to 10 before plugging it in again. Head back into PUBG to check if this has fixed your lag.

Check service status in your area. Most internet service providers allow you to check whether your area is suffering with internet problems by entering your Post/ZIP code. If so, this could be a most probable cause.

You can do a speed test online to see if your internet is performing how it should.

READ:  PUBG Mobile: How to unlock and buy new clothes