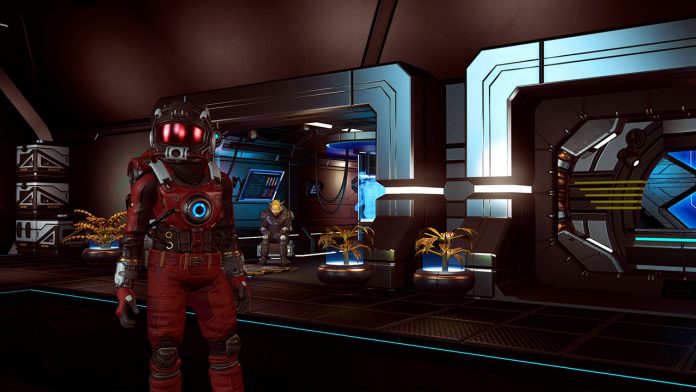 The NEXT 1.5 Update for No Man’s Sky added a lot of new features. We’ve seen third person view, emotes and character customization all added to the game today. It’s by far the biggest update to reach the game so far.

With the addition of multiplayer, it was obvious that character customization was needed to help increase immersion and to identify friends in-game. Hello Games went above all expectations when it came to character design this patch.

You can play as one of the in-game races such as Anomaly, Gek, Vy’keen, Korvax & Travellers. Whilst there are multiple armor pieces that you can choose from, as well as color choices. There is a lot!

Below, we have a quick guide which will help you get started on creating your own custom character. If you want to read the official patch notes for NMS 1.5, they’re available here.

Where to begin Character Customization

You won’t be able to do customize your character at all until you reach a space station. To actually do that, you will need to have a functional ship to be able to leave the planets surface, then be able to reach warp speed to get to one of the space stations.

If you’ve just started playing, this process could take you a while and you may need to progress through the games story just a little bit to reach these requirements. Otherwise, head to the nearest space station when possible.

You will need to find an ‘Appearance Modifier’ in the station. It looks like the image above, and can usually be located on just one side of the station.

Once you’ve found the appearance modifier, interact with it to begin creating your own custom character. There are a lot of options in the modifier, so look through every menu! After you’ve finished, just exit and it will ask if you want to save your changes.