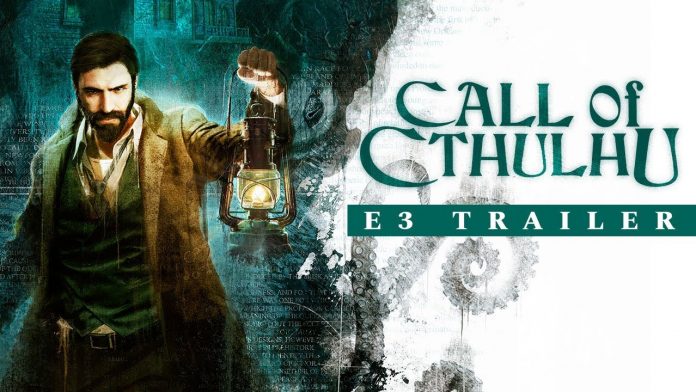 Many are fearful of the concept of the unknown. Thoughts and concepts that extend beyond what we are familiar and comfortable with and fester and rot the minds of those unprepared for such strain. It’s ironic that Call of Cthulhu would both be such a recognizable name, as well as such a good game.

Call of Cthulhu is a first-person RPG developed by Cyanide and published by Focus Home Interactive. Based on the pen and paper RPG of the same name, it follows the story of Private Investigator Edward Pierce as he uncovers the mysterious circumstances surrounding the dreary island of Darkwater.

This is not to be confused with Call of Cthulhu: Dark Corners of the Earth, a different first-person RPG from 2007 based on the same origins. The two games are not connected in anything other than their source of inspiration. The game leaves a fantastic first impression. Many of its strong points present themselves immediately, namely the narrative and graphical aspects. When you’re not being enamored by story the game weaves in front of you, you’re soaking in the amazingly artistic settings and landscapes.

Expectations tempered in time, however. As you continue to progress, you see both the benefits of a well-implemented stat system as well as the unengaging and sometimes downright frustrating stealth mechanics that frequent the game. Assuming you didn’t get stuck in one of the few particularly directionless moments therein. H.P. Lovecraft is arguably one of the most famous American authors of all time. Undoubtedly so in the horror genre. It takes true skill and talent to reach such levels of acclaim. That leaves a fair amount of pressure on a game like this to measure up, which it does with excellence. Through a combination of internal dialogue, character interactions, and environmental storytelling, Call of Cthulhu cultivates a narrative experience that even Lovecraft would be proud of.

What made this even better was the actual world I was in, the one I could see with my own eyes. In regards to visual quality, this is some of the best I’ve ever seen. While no singular object is particularly well detailed, the overall artistic style of each environment is phenomenal. The intelligent use of color themes to draw the most from a setting had me stopping several times throughout the game so that I could take a screenshot. The fires from whale oil lanterns glowing their eerie green reinforced the dilapidated ruin of Darkwater, contrasting against the warm tones of wood and brass inside of Pierce’s office and other sophisticated settings. Call of Cthulhu built a world that was rich with story. Each segue, each diversion, was given as much care and detail as the main story. The intricately placed secrets and lore were left for the player to discover in a way only a video game could achieve. The local drunkards would mention how a nearby thug would frequently visit the docks. Eavesdropping on said thug would reveal that he had been stashing bootleg alcohol in his shed. It gave me everything I needed to deduce that I’d find some booze by breaking into the waterfront storage building. The indirect approach to information gathering made the game feel far more immersive than usual.

This sense of personal involvement was also felt in the game’s stat system. Throughout the game, the player gradually increases a collection of relevant statistics, such as psychology, medicine, and strength. While there is no requirement to leveling up these stats to progress through the game, they play a surprisingly influential role in HOW you beat the game. When the player has an opportunity to make a “stat check,” they have a random chance to succeed in their action. This can range from convincing someone to help, to parsing important information from your environment. The likelihood of success is aided by your stat’s level. One example that came to mind was in regards to an awful gas the player had to traverse through. When I had examined the gas, a medicine check was made and my character simply remarked on the potential health risks. Unfortunately, my game crashed shortly after (due to a defective hard drive, and not a fault of the game). This did, however, confirm the genuinely random nature of the stat checks. When I checked the gas a second time, my character also included the precaution that such a gas could have mental effects, explaining the hallucination I’d face not long after.

There were countless times throughout the game that I wondered how differently things would have gone had I failed/passed a particular stat check. Would the local police officer agree to come with me to the scorched estate? Would the bartender have allowed me service? Either the game has a fantastic level of choice or a very well crafted illusion of one. Lovecraft was not a perfect novelist. And this game is not a perfect game. Some of the game’s more gameplay-focused mechanics were flawed in their execution, while some of that narrative freedom offered to the player would actually turn around to haunt and hinder me. Key points were easily overlooked.

Stealth is a recurring feature in Call of Cthulhu. Sometimes it’s hiding from cultists, sometimes from doctors. While having to hide is a very “horror” type thing to do, the idea was not as smoothly implemented in the final game. Often times the thing you are hiding from is unpredictable in its ability to see you. I could be inches away, behind and to the left of them, making small jumps, and they wouldn’t notice. But if I’m only partially hidden behind a chair two rooms away, but in the direction they’re looking, they’ll notice me.

Fortunately, as soon as they give up looking for you, which they do easily, they’ll return to their original patrol, having entirely forgotten that a devilishly handsome interloper is crouch-walking all about their abode. The frustrating part, however, is with the integrated hiding areas. Much like in Outlast, the player can hide within cabinets and cabinet like items, completely removing them from the sight of anyone in the area. Except that the mere act of being in said cabinet will slowly drive the player insane. I can understand why hiding in darkness can be discomforting, but 15 seconds in a dark closet won’t have me questioning my reality. This made me feel punished for trying to utilize the stealth mechanics provided for me.

Occasionally, the next step is always clear. Sure, you could argue that being a detective, I should have to figure out the next step on my own. But in the interest of time and focus retention, I didn’t want to go around, examining every item available to me before proceeding. The worst example was with one of the first “boss fights.” I won’t reveal the situation, in order to maintain a spoiler-free article. But it required I pick the right item, in a room full of similar items, while sneaking around a boss that would kill me upon finding me. After several instances of trial and error, each ending in my death, I resigned to looking up which item I was supposed to get. It’s very possible that the game would have indicated which item was the right one prior to the fight. But with nothing to nudge me into a closer examination, the detail was easily overlooked.

Call of Cthulhu is a top-notch narrative experience. The story, sound, and visual setting alone make this game worthwhile. Just be prepared for a few rough patches and hiccups along the way.

Call of Cthulhu was developed by Cyanide and published by Focus Home Interactive. It’s available on PC, PS4, and Xbox One for $44.99. More information about the game, including links to buy it, can be found on the official website. A copy of the game was provided for the purposes of this review.

Many are fearful of the concept of the unknown. Thoughts and concepts that extend beyond what we are familiar and comfortable with and fester and rot the minds of those unprepared for such strain. It's ironic that Call of Cthulhu would both be such...Call of Cthulhu Review