Minecraft 1.16.4 just came out, and with it, an update to many mods. This update to Minecraft didn’t make any significant changes, apart from some minor bug fixes and quality of life changes.

But even so, it’s still an important one, as it’s likely the final update before we hit Minecraft 1.17. The snapshot for the upcoming release was even released not long after.

Anyhow, in this list, we’re going to take a look at the 25 awesome mods which are currently available for Minecraft 1.16.4. I tested all these mods using the Forge Mod Loader. 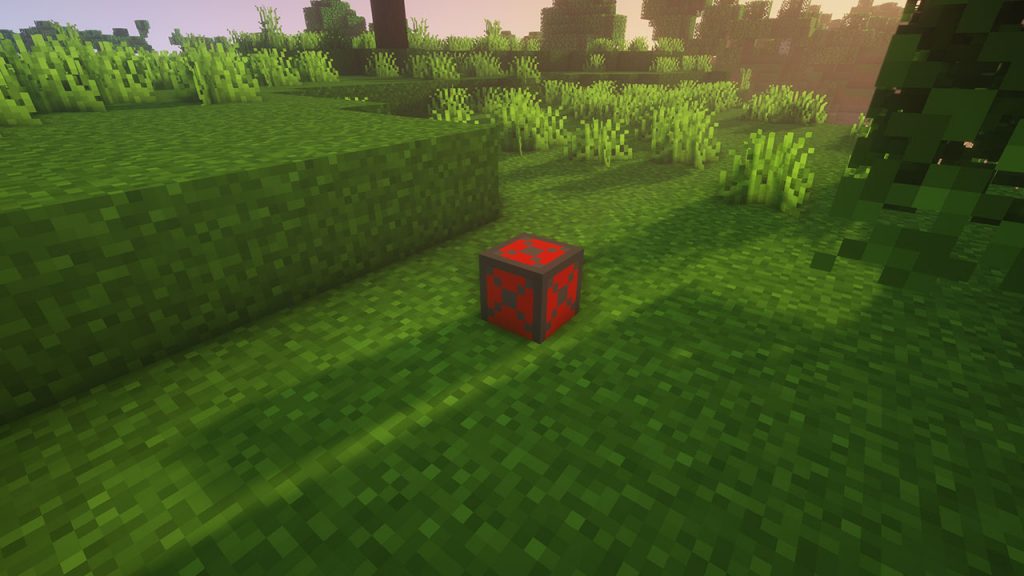 If you play Minecraft with friends, then you might want to check out Security Craft. It adds many new items which should help you out with defending your base. Some of the new things you can craft includes Sirens, Inventory Scanners, Password Protected Chests and even an item which can make blocks unbreakable to anyone except you. 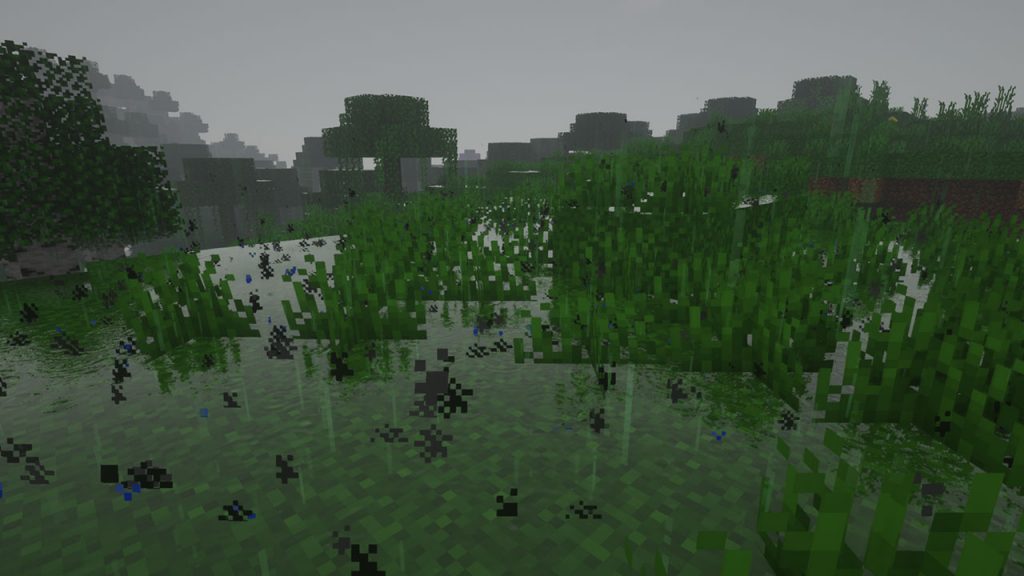 Better Weather adds two new weather events into Minecraft, which are Acid Rain and Blizzards. During an Acid Rain, the player and other living entities will take damage occasionally, and plants will also be affected. Whereas Blizzards are a little more forgiving, causing water to freeze rapidly. 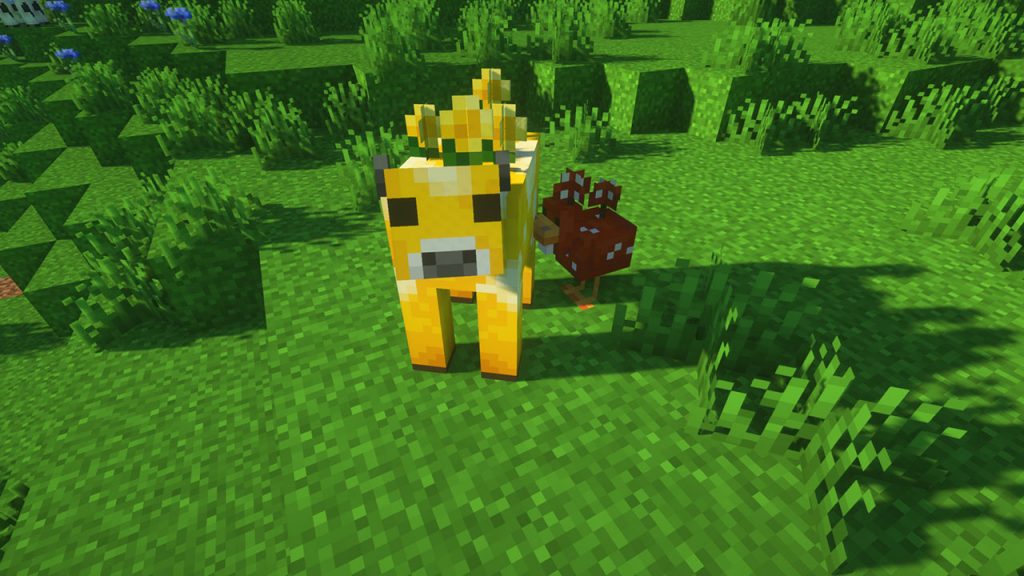 If you’ve played Minecraft Earth, then you might be interested in the Earth Mobs Mod. Currently, this mod adds the Muddy Pig, Moobloom and Cluckshroom, and each of them add some new special effects. Mooblooms can increase the growth speed of nearby crops, whereas the Cluckshroom can lay Smelly Eggs, which give the slowness effect when thrown. 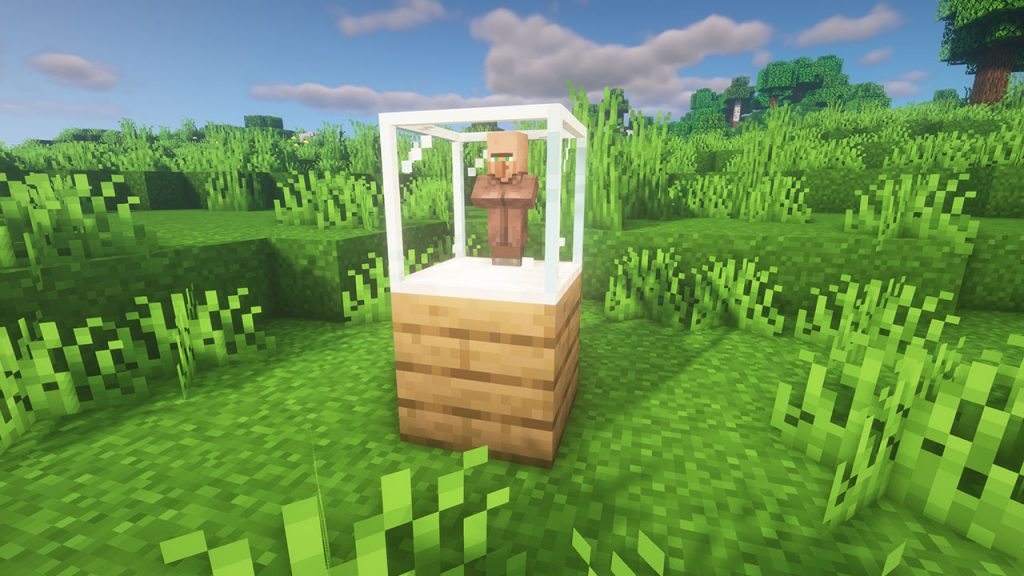 Easy Villagers will make managing Villages in Minecraft a much easier task. Now, you can pickup Villagers and place them down again in a location of your choosing. There are also new blocks which allow you to store Villagers in compact cases, allowing you to quickly access them. 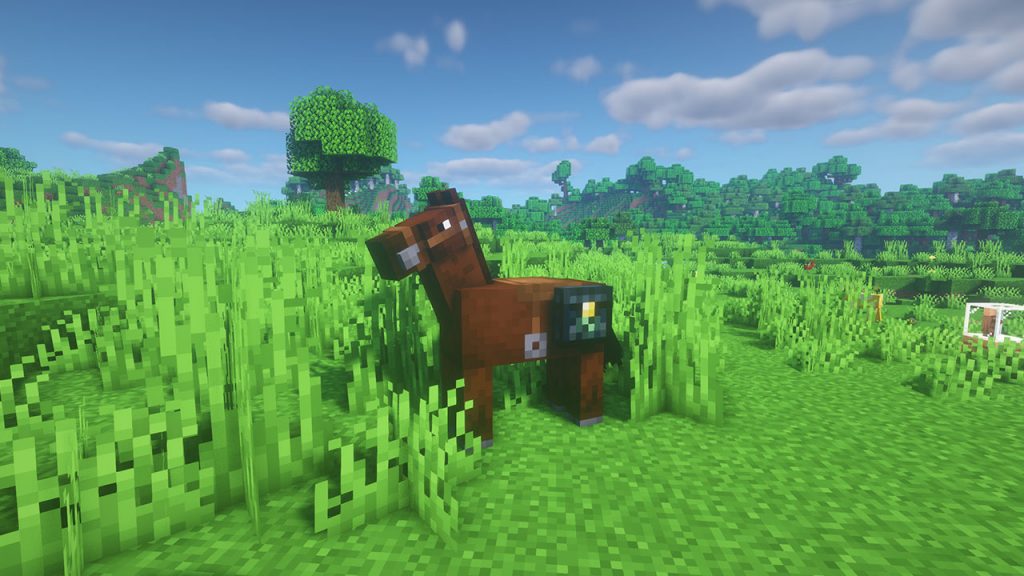 Ender Chested is a simple mod which allows you to equip any tamed horses you own with an Ender Chest, providing you access to your chest and extra storage space while travelling. 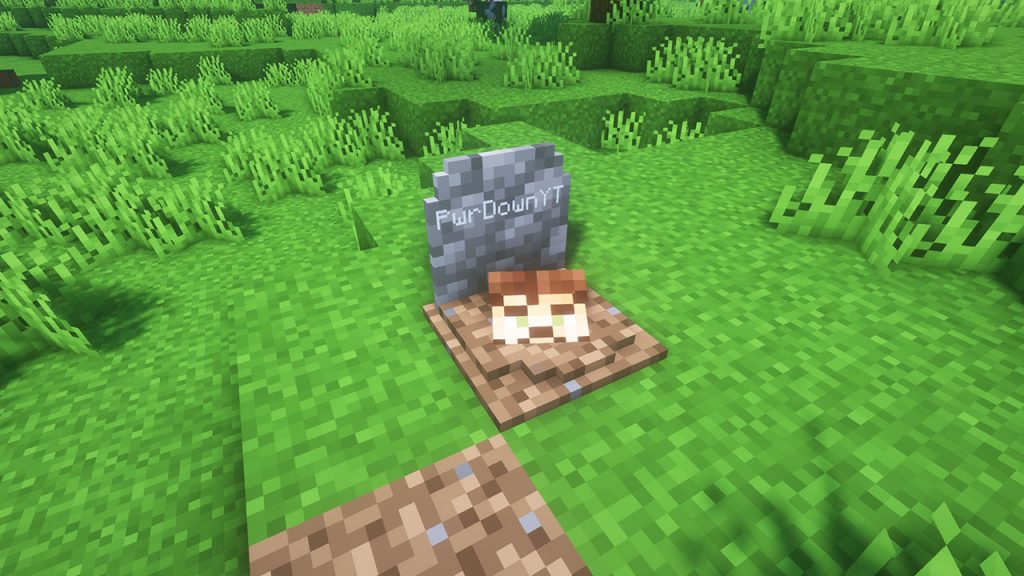 With Gravestones, most of the stress that comes with dying in Minecraft will be removed. Now, your entire inventory will be stored inside a grave, allowing you to retrieve your items without them despawning. You’ll also receive a note, which will provide the coordinate, so you can quickly get back. 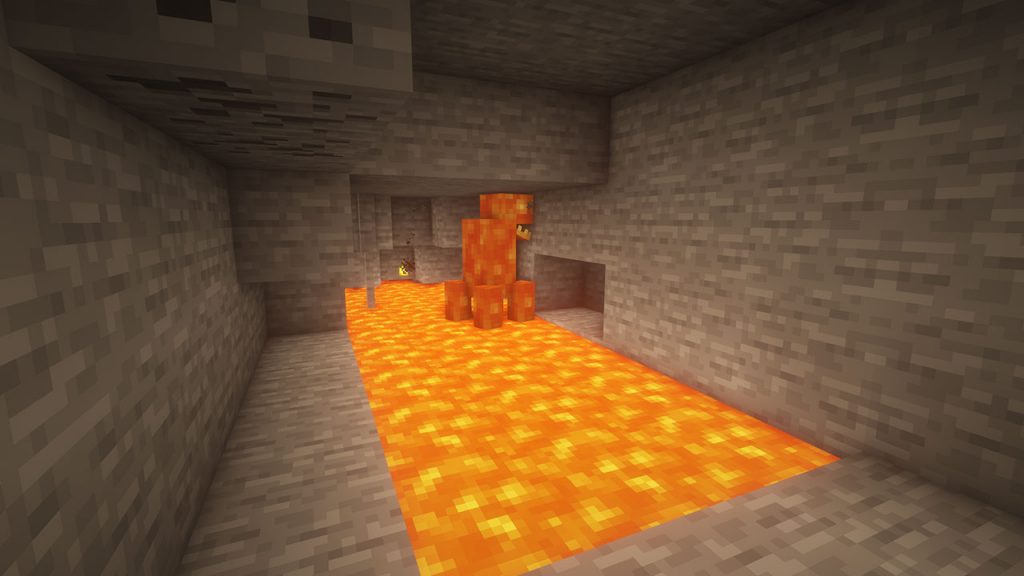 Lava Monsters are a new hostile enemy which will only spawn in Lava. They have attacks which are similar to Blazes, where they’ll spit fireballs at you. If these monsters leave the lava, then they’ll leave a trail of fire behind them. 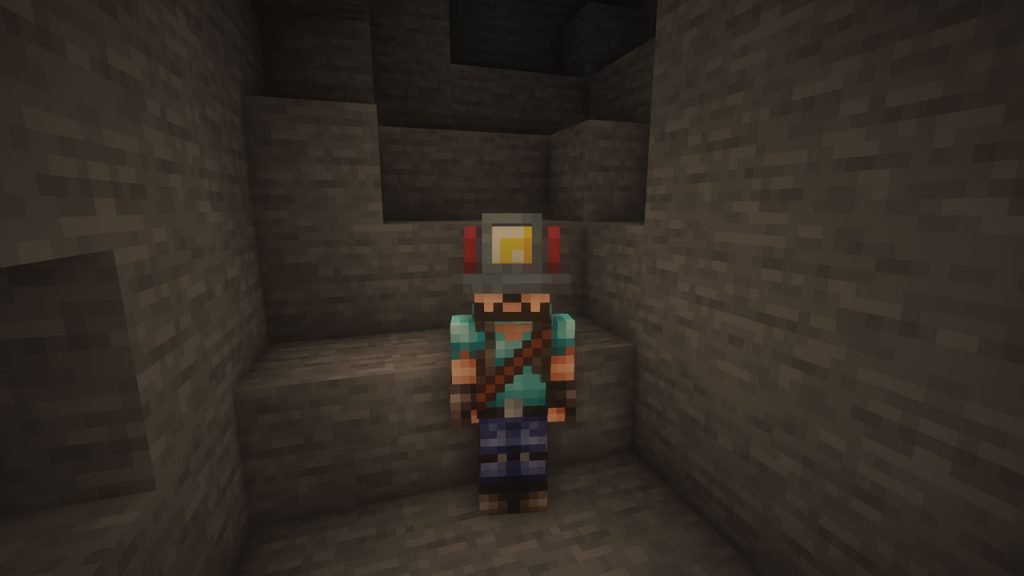 Miners Helmet is a mod that’s incredibly handy when venturing underground. When equipped, it will allow you to light up the area around you, removing the need to carry torches. They’re relatively cheap to craft too, requiring just two Leather, three Iron and a Lantern. 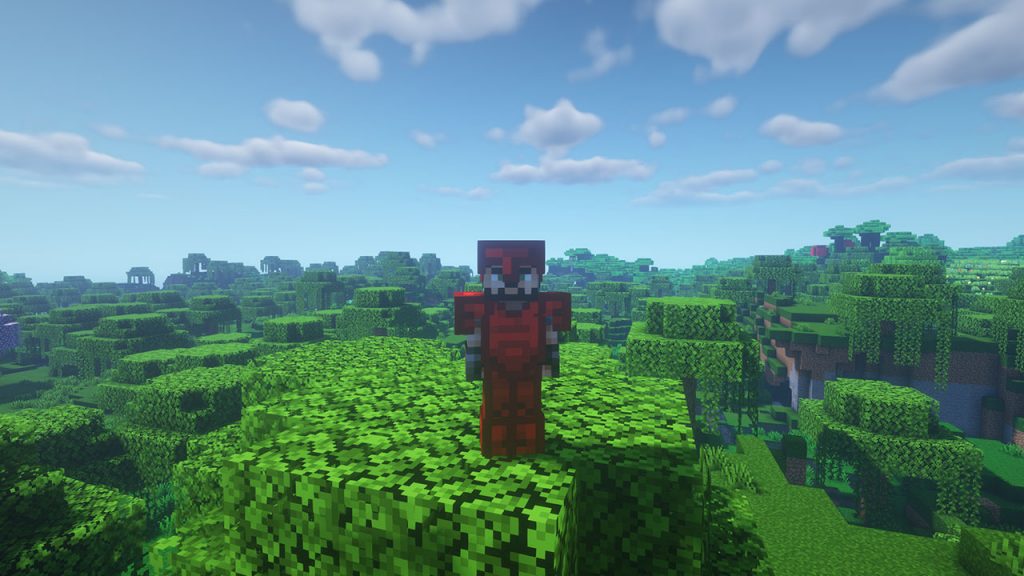 More Vanilla Armor will add fourteen new sets of armor into Minecraft, with some even being better than Diamond. All these new sets can be crafted out of Vanilla materials, such as Obsidian, Quartz, Redstone and Bones. 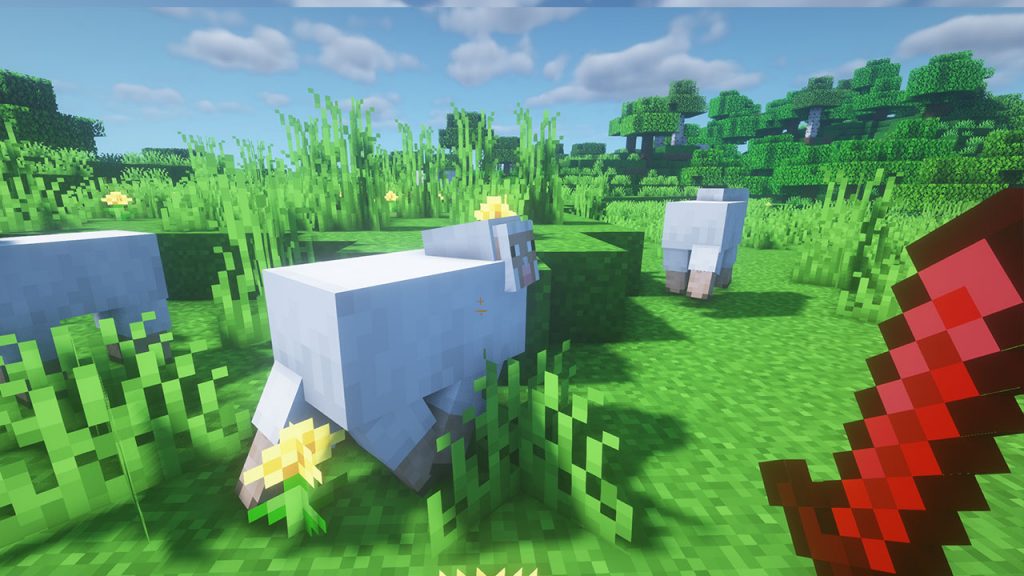 Alongside More Vanilla Armor, you might want to install More Vanilla Tools. Just like the previous mod, there’s fourteen new tiers of tools which all use the same materials as the armor. The tool types that are supported include Swords, Axes, Pickaxes and Hoes 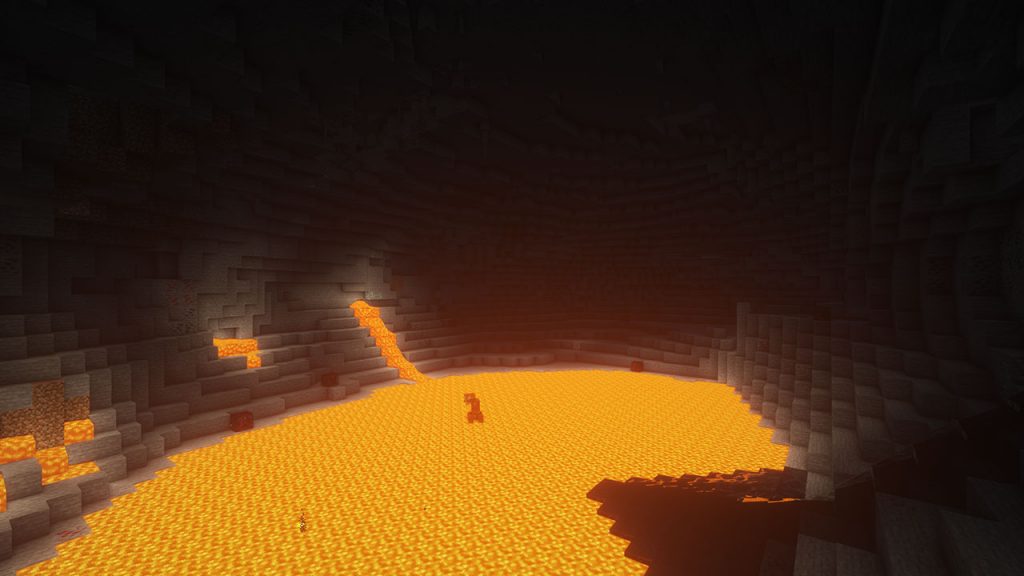 Quark is a huge mod, adding more than I could possibly talk about in this video. It adds new features to almost every aspect of Minecraft. When it comes to new animals, you’ll find Crabs, Frogs and Foxhounds. There are also some major changes to world generation, with there being new trees in the overworld, and new cave generation beneath the surface. 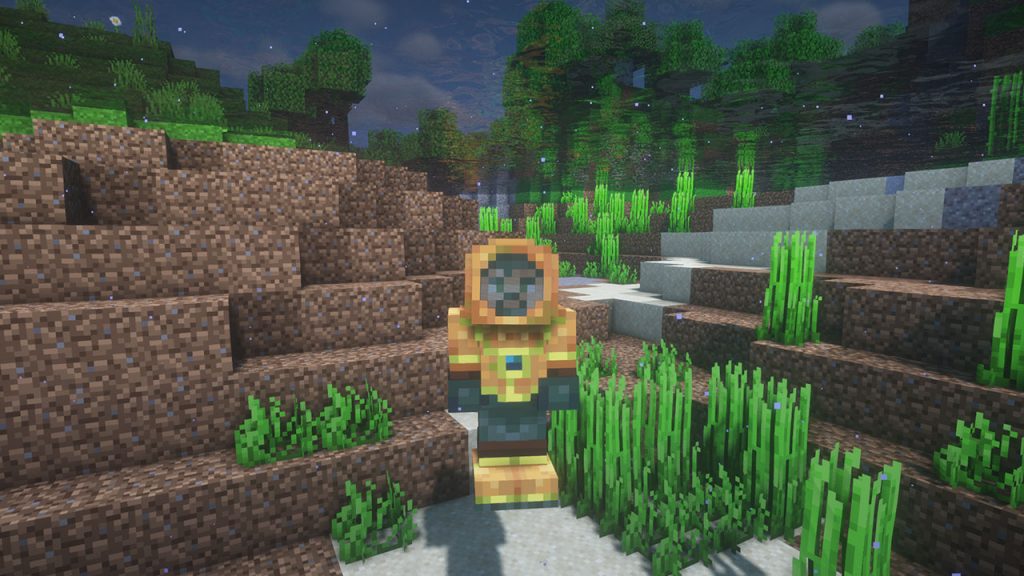 Scuba Gear is a new armor set which provides some bonuses when underwater. When wearing the full set, you’ll be able to breathe underwater, mine blocks at a normal speed, have increased swimming speed and be able to walk quicker underwater. The easiest way to obtain this armor would be by looking for Drowned, specifically near Ocean Ruins. 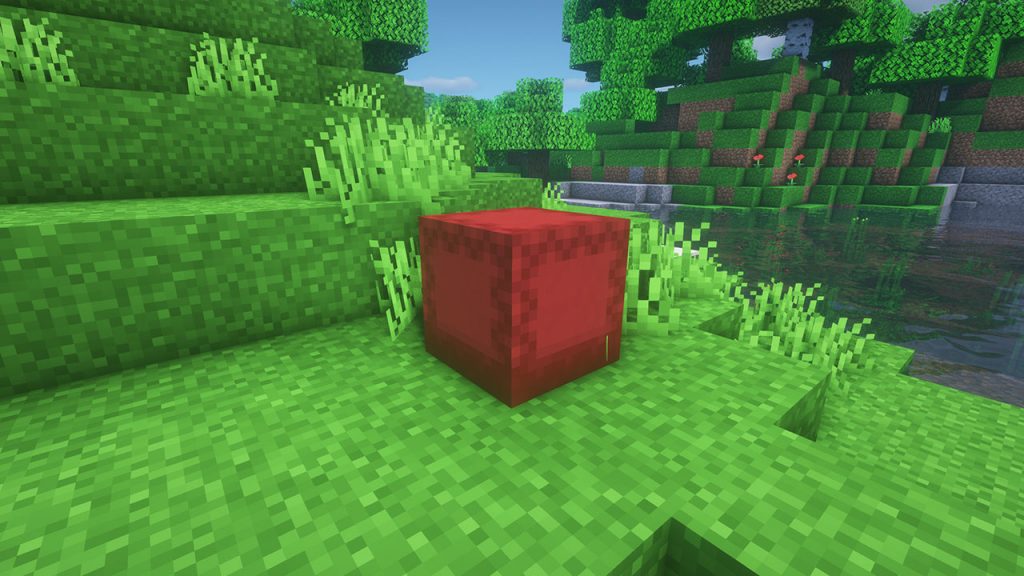 A small quality of life mod is Advanced Shulker Boxes. With it installed, you’ll no longer have to place Shulker Boxes down to access them. Instead, you can simply right click anywhere with the box in your hand to open it. 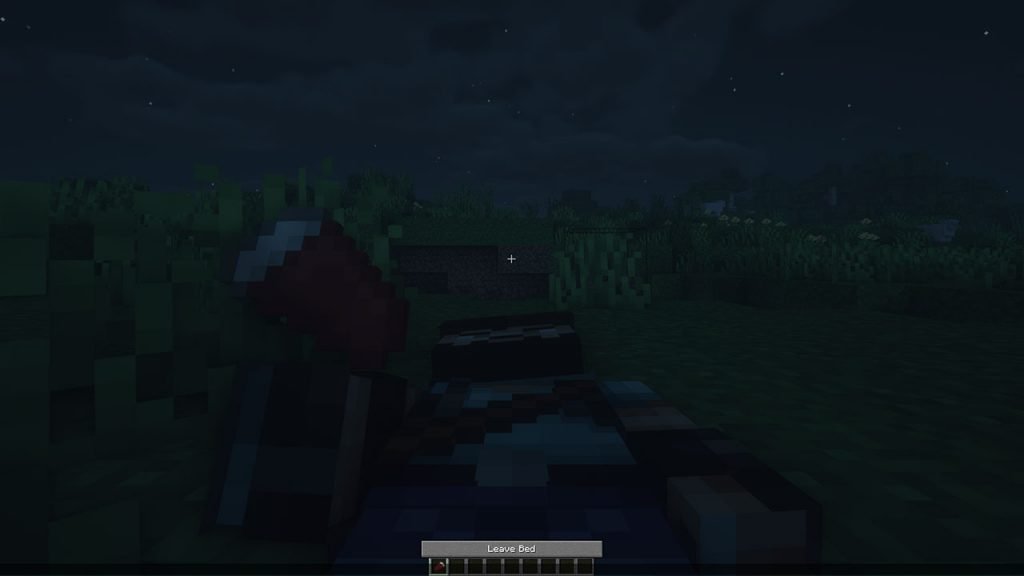 When exploring in Minecraft, it’s not possible to sleep through the night without changing your spawn point. With Sleeping Bags, you can now place one down to sleep in, keeping your original spawn point set and allowing you to skip the night. There’s also a lot of different sleeping bag colors available. 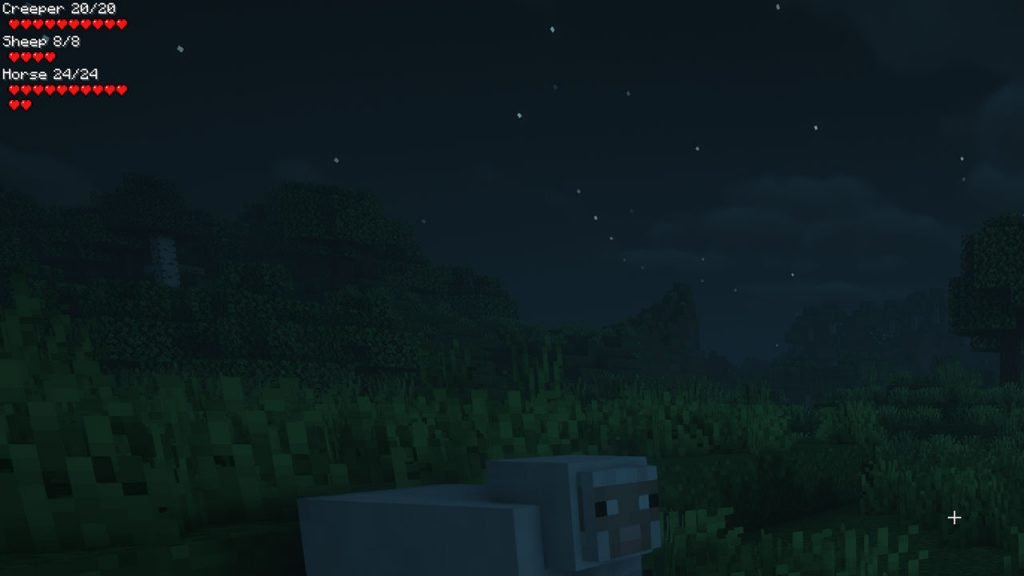 Surrounding Indicators is a client-side mod which adds some health information to the top left area of your Minecraft game. It shows the health of any entities around you, so that you know not only what’s nearby, but how many more hits it’ll need. 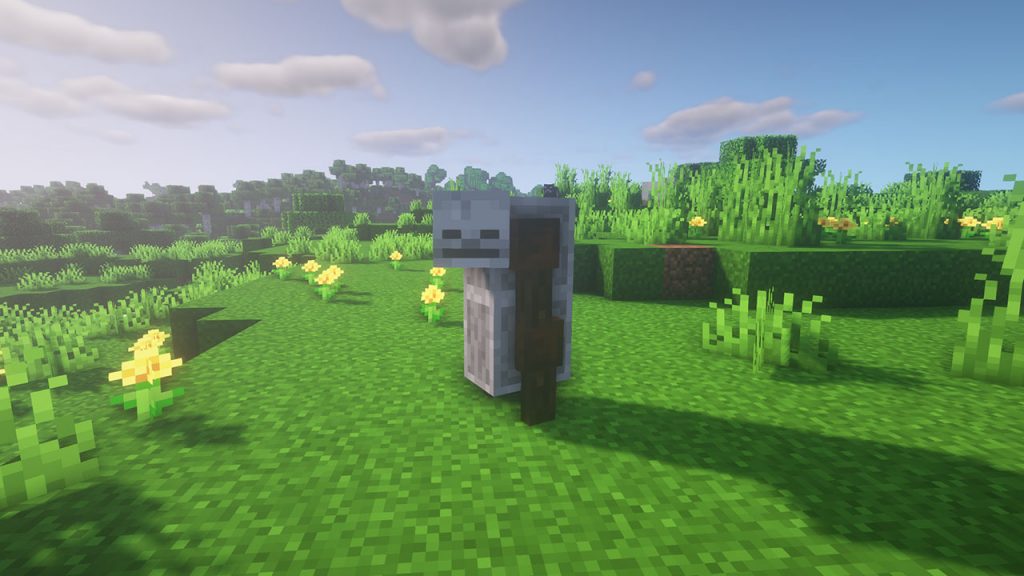 TNT Yeeter is a new enemy in Minecraft. As you’d expect, it throws ignited TNT at you while shouting Yeet. Currently, it only focuses on both players and cows. This mod is a work in progress, so it currently doesn’t spawn naturally, and can only be spawned by using an egg or commands. 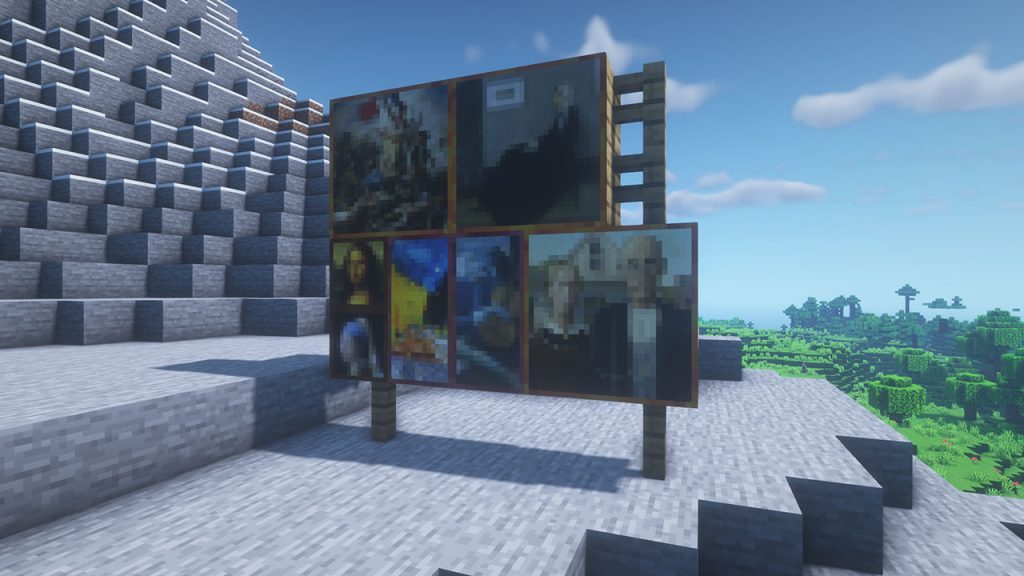 I spoke about Classical Art in a recent video, but felt it was worth including again. With this mod installed, you’ll have access to nine new paintings, featuring famous pieces such as the Mona Lisa, American Gothic and Starry Night. 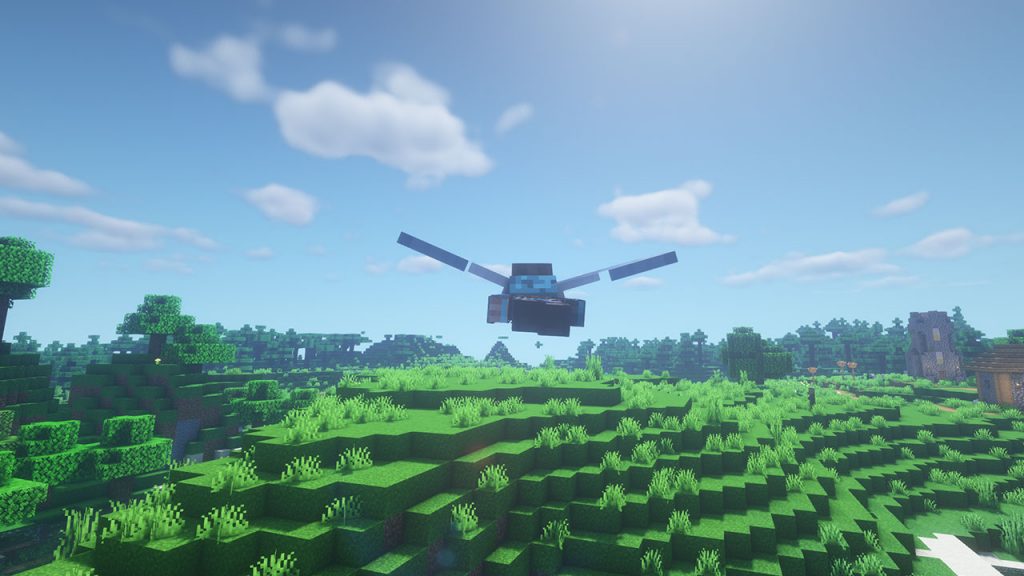 If you like to fly around with your Elytra, then you might want to use Reusable Rockets. Now, there’ll be three tiers of rockets which can be used infinitely. Each tier increases the amount of uses, with the highest providing 128 uses. Once they’ve ran out, Rockets can easily be replenished using Gunpowder 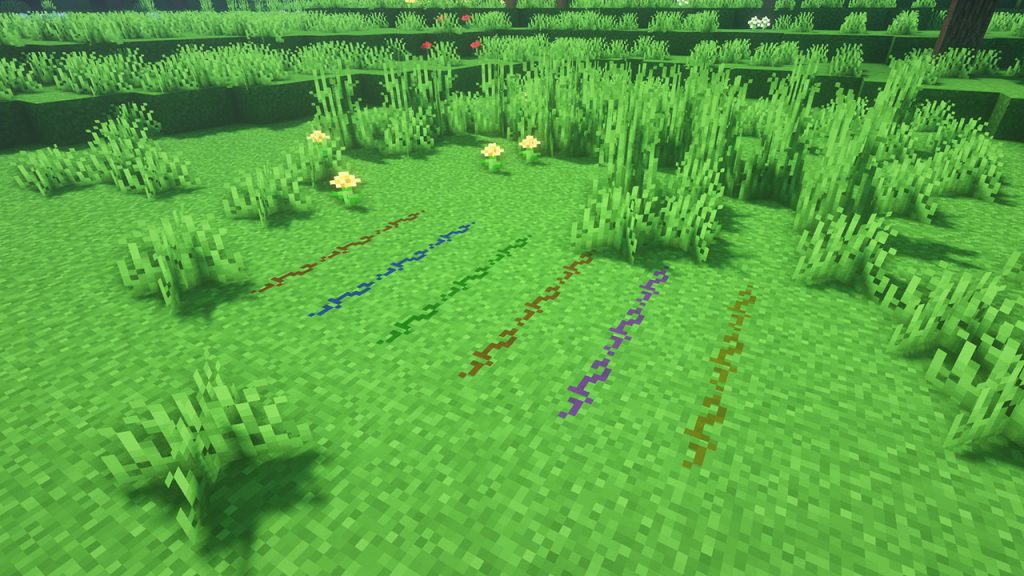 Working with Redstone is a lot easier thanks to the More Wires mod. Now, there’ll be five new colours of Redstone Wire, allowing wires to finally run parallel to each-other. There’s also a new item called Infiniwire, which is the same as Redstone, but the signal can run for infinity. 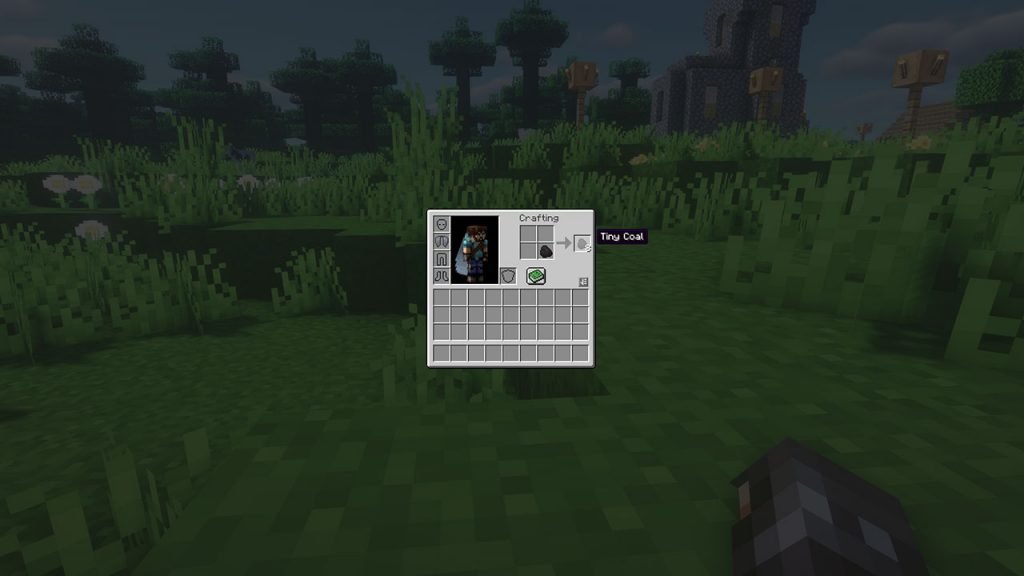 If you didn’t already know, a single piece of Coal in Minecraft can smelt eight items in a Furnace. If you only want to smelt a single item, then you’re definitely wasting Coal. With Tiny Coal, you can cut a piece of Coal into eight Tiny Coal, allowing you to make sure you’re reaching maximum efficiency. 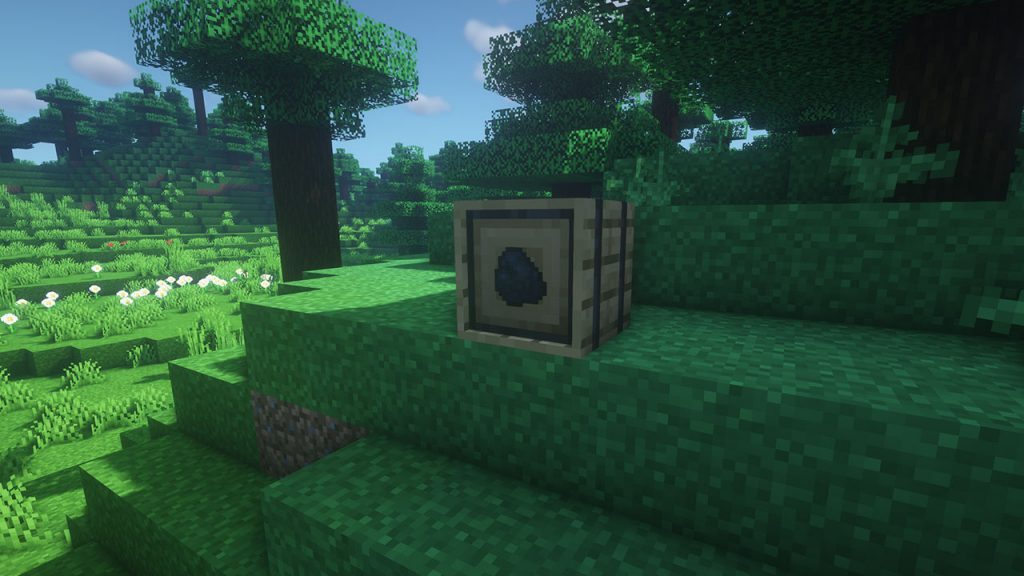 Storage Overhaul will completely change most container types in Minecraft. Chests now have multiple tiers, with each one granting an additional nine slots. The same goes for Barrels, but now there’s Storage Barrels which can hold a single item type, and can be quickly interacted with to store and retrieve items. The item that’s inside will also be displayed on the front of the barrel. 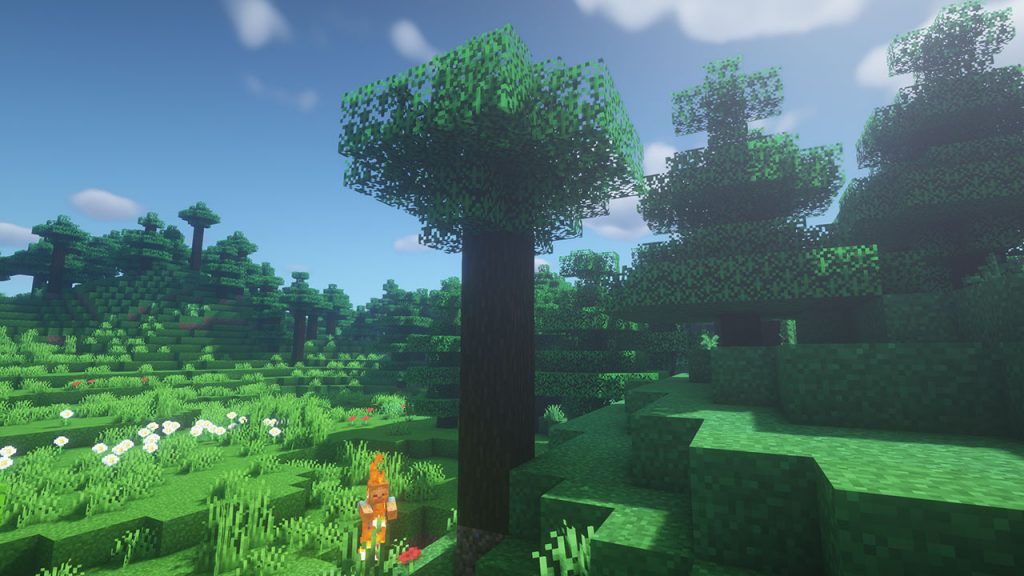 Falling Tree will change the tree chopping mechanic in Minecraft. There are two modes available, which are Instantaneous and Shift Down. With Instantaneous, the entire tree will fall once you break a single block. Whereas with Shift Down, logs will break from top to bottom. 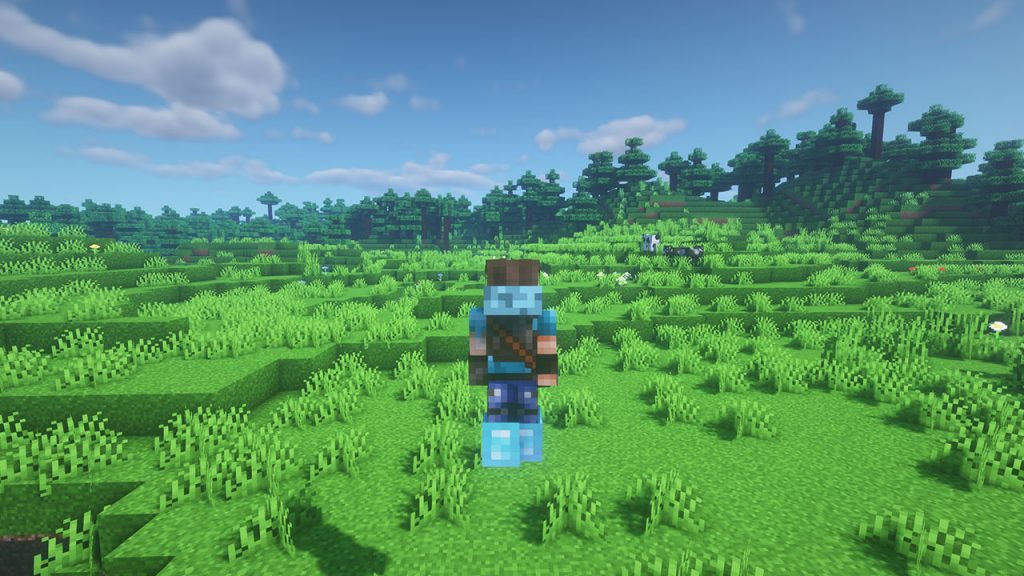 Leap is a new enchantment which can be applied to Boots. When done so, you’ll be able to do an extra jump when you’re in mid-air, allowing you to jump greater distances. It works like other treasure enchantments, and can be obtained from either loot in chests or librarian villagers. 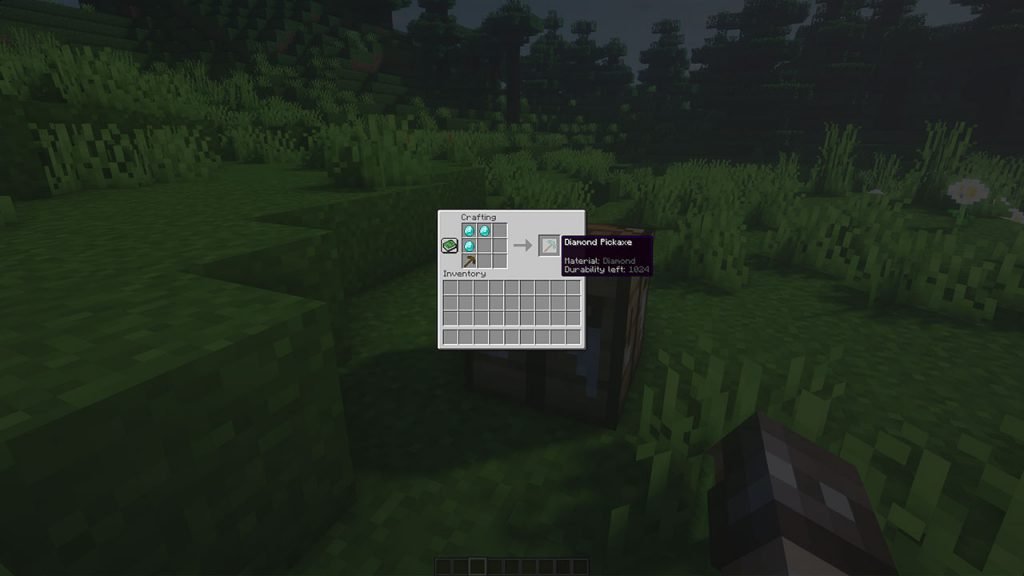 Advanced Tools makes a lot of changes to your tools in Minecraft. Tools can now be upgraded between tiers, and repaired as long as you have the corresponding material. Though one of the most interesting features is that tools now have statistics, showing interesting information such as the number of enemies hit, or the number of blocks mined. 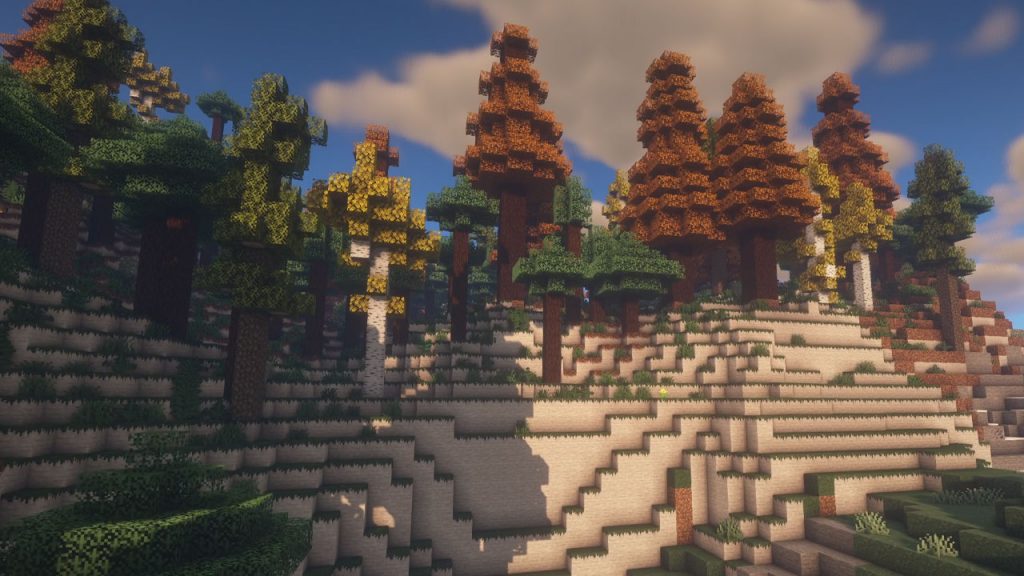 To change up world generation, take a look at Oh the Biomes You’ll Go. In total, it adds over seventy new biomes which really spice things up in your world. The best part is that these Biomes aren’t just for Overworld either, as you’ll also find them in both the Nether and End Dimensions too.