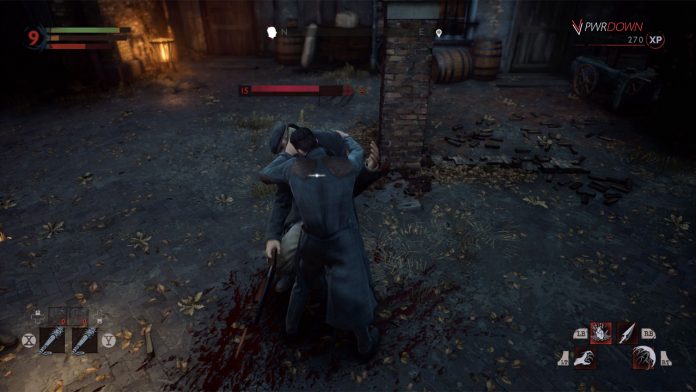 Blood is a resource in Vampyr which works alongside health and stamina. You consume blood in order to use your vampire abilities. As it sounds, you will need to get blood from living things in the Vampyr world.

Later on, you can evolve your character (Dr Reid) to harvest more blood as well as being able to carry more. At the start of the game, the whole concept may seem a little confusing. Don’t worry though, we have a guide available below for all you PC, PS4 & Xbox players!

If you’re looking for some more Vampyr content, PwrDown has you covered!

First, the Blood bar can be located in the top left of the screen. It’s the red bar, whilst green is health and brown is stamina. You are going to need to harvest it from people and animals. Luckily, it doesn’t have any impact on the game as long as you kill guards and not citizens.

The easiest way to collect blood is to stun your enemies and bite them. When I say enemies, I don’t mean actual citizens who have names. I’m talking about generic guards and Skals.

We have covered a guide already on how to stun enemies. The gist of it is that you can sneak up on your target to stun them, or use a weapon that has the stun attribute. Under an enemies health bar is a brown bar, when this hits 0 they will be stunned.

When a target is stunned, you can bite them which will give back a large amount of blood. Enemies can also be stunned multiple times during a fight to keep you topped up and allow you to use your abilities repeatedly.

READ:  Vampyr: How to Heal & Get More Health

Occasionally, you may find Rats running around. These can be eaten too for their blood. They don’t give as much as Guards or Skals, but it’s essentially free blood and they constantly re-spawn. Listen out for Rats, as they are quite loud!

Otherwise, you can create Serums at the crafting bench with your materials that you have found by scavenging. Serums can be quite expensive to make, but offer a large amount of blood instantly. As well as blood serums, you can also make health serums.