Datapacks are great to add to any Minecraft worlds, or even servers. They don’t require Forge/Fabric, making them pretty easy to install and use.

Minecraft 1.18.2 brought quite a few updates when it comes to structures, so you can expect a lot of the Datapacks in this list to be themed around structures. And all of these packs where released over the past 30 days or so, making them relatively new. 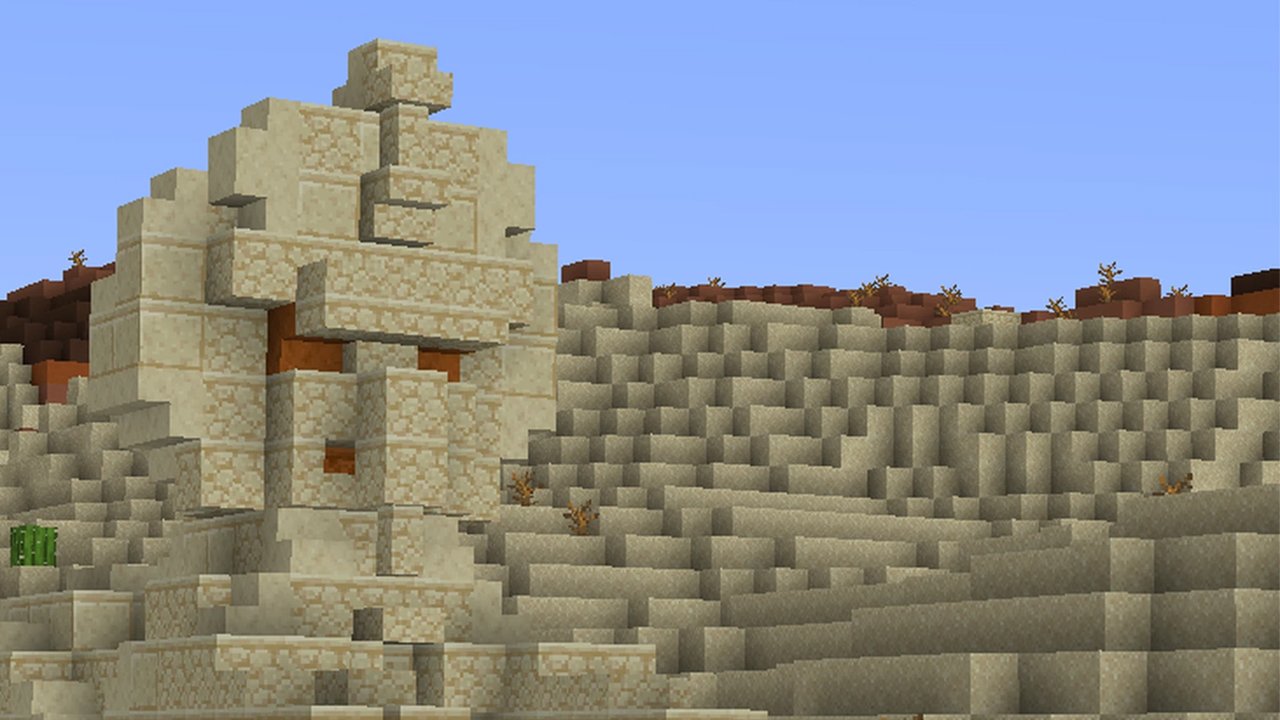 VentureCraft adds some well thought out structures to your world. Across different biomes, you can find structures like Windmills, Guard Towers, Old Enchanting Areas and even a Sphinx, which looks like a Villager.

At the Guard Tower, you can find quite a bit of loot, being protected by Perished Guards. Whereas at the Sphinx, you can go inside by walking on the Pressure Plate, to collect Ore Blocks inside.

The Tinkerers Oak is pretty cool too, with it being a cramped house inside a Tree. The developer intends to add more structures to the pack in the future, like Dungeons. 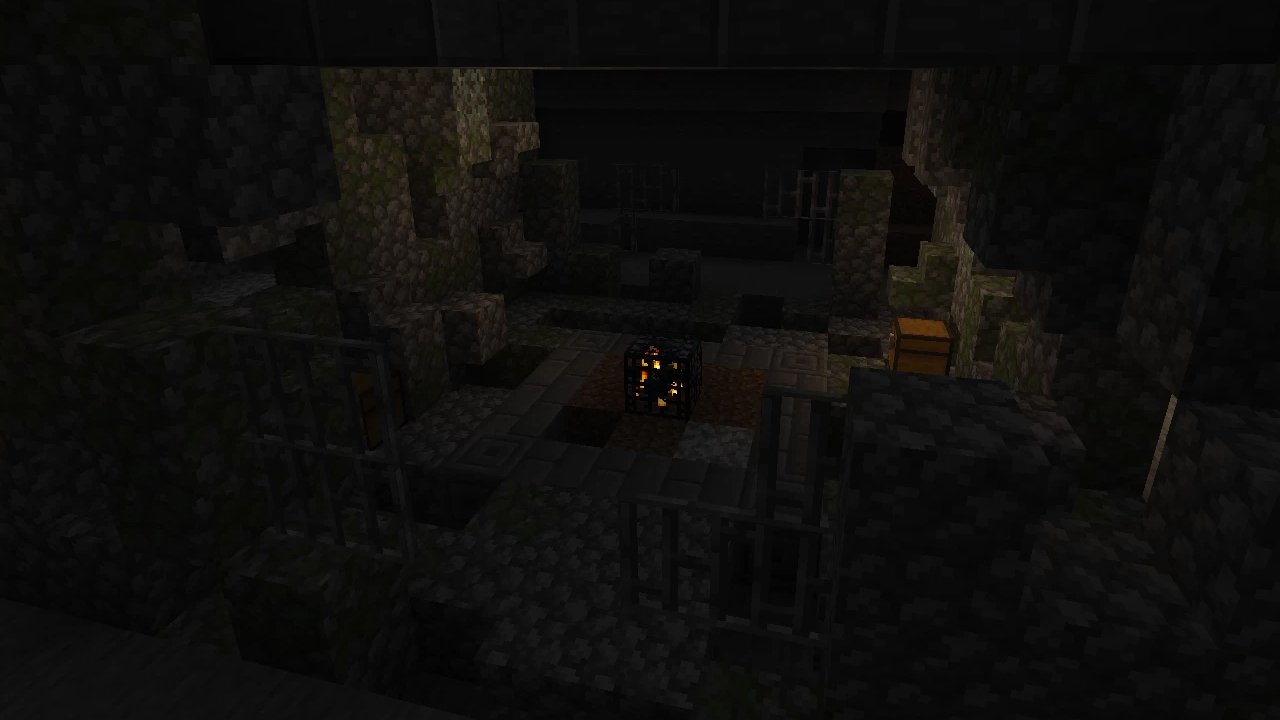 Speaking of Dungeons, try out the Dungeons Plus Datapack. It adds 6 new Dungeons to Minecraft, which are an improvement on the Vanilla box Dungeons.

You can find these Dungeons spawning in different Biomes, and will summon mobs like Creepers, Zombies, Spiders and Drowned. You can expect to find the same loot that you would in Vanilla Dungeons, and once again, the developer plans to add more in the future. 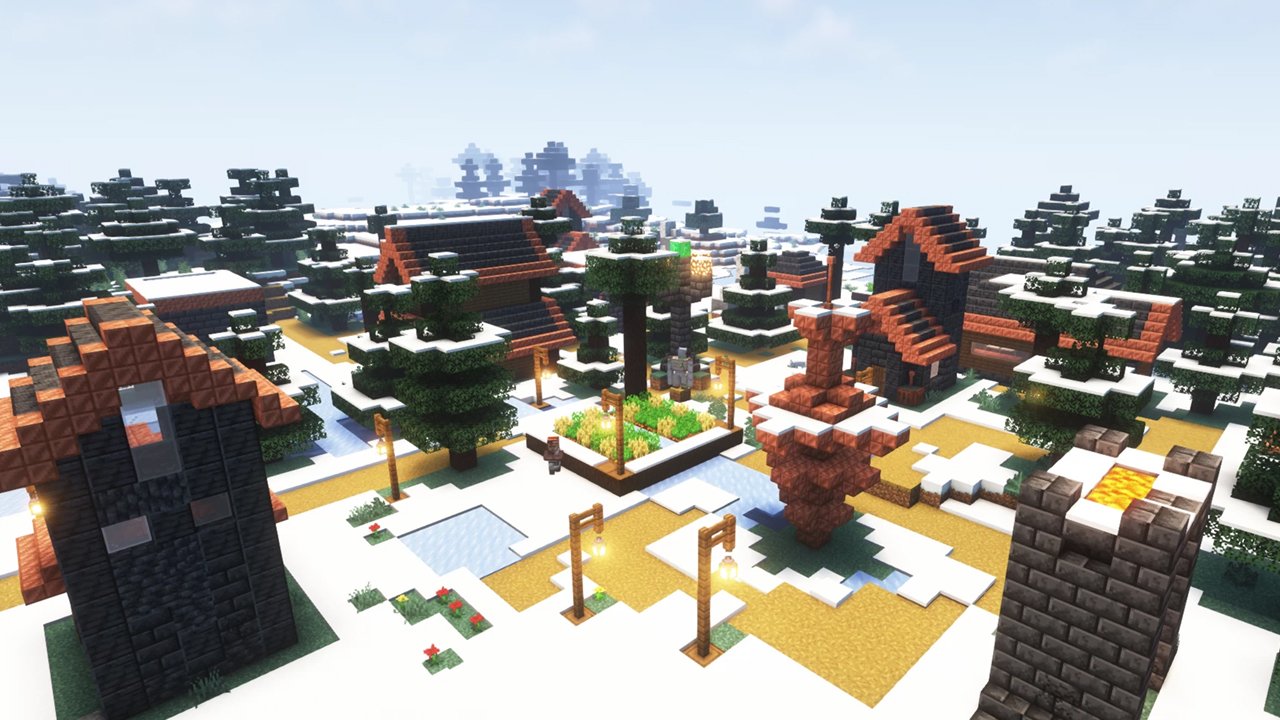 This next Datapack will add a new Village, which can spawn in Biomes like the Jagged Cliffs, Stony Peaks, Grove and Windswept Hills. Most of the structures will be made up of Wood, Copper and Deepslate.

They’re a lot richer than normal Villages, so you should expect to find more loot here too. There’s also custom structures, like different Houses and Towers. One interesting feature is that due to their height, these Villages have Fortified Lightning Rods.

When these are struck by Lightning, they’ll become charged, and fire a beam at a random mob, or the player. 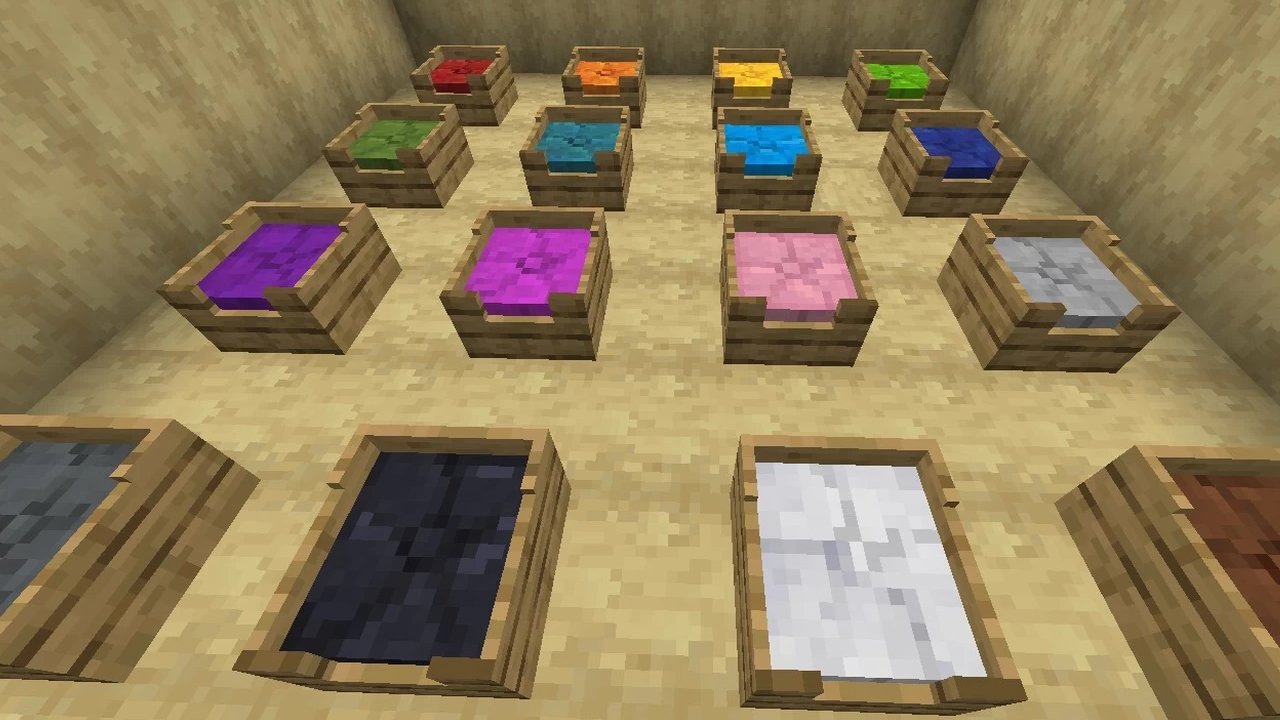 By dropping a Bone on a Crafting Table, you’ll receive a Station Crafter. Inside, you’ll then need to craft a Dog Bed, from Wool and a Slab. When you have a Tamed Wolf sitting on a Dog Bed, you can right click it with a Bone to see its stats, such as Perks and Experience.

From now on, a Wolf can collect Experience like players, and will level up over time, although it takes a lot of Experience. As it levels up, it will gain increased Health, Damage, Speed and Perks. The Perks include a Wolf giving Health Regeneration to its owner when they’re low on health, or occasionally digging for loot.

You can also craft Toys inside the Station Crafter, which can be given to your Wolf to give them abilities like the Totem of Undying, being immune to fire and being able to disable Creepers or TNT. 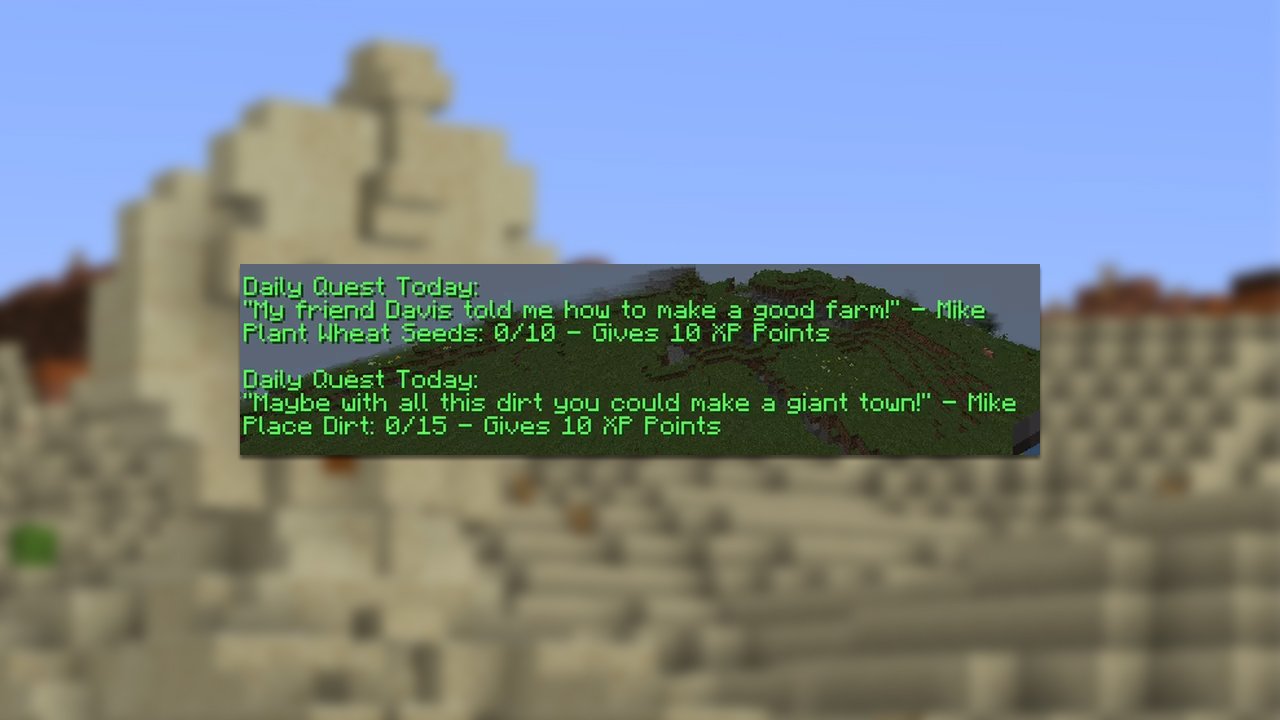 Every morning in Minecraft, you’ll now receive a Daily Quest, from someone called Mike. There’s around 40 Quests included with the pack, which might have you do tasks like Sleep in a Bed, Kill Zombies or Mine Diamonds. You can have a maximum of 3 Daily Quests active at once, and you’ll receive Experience as a reward. 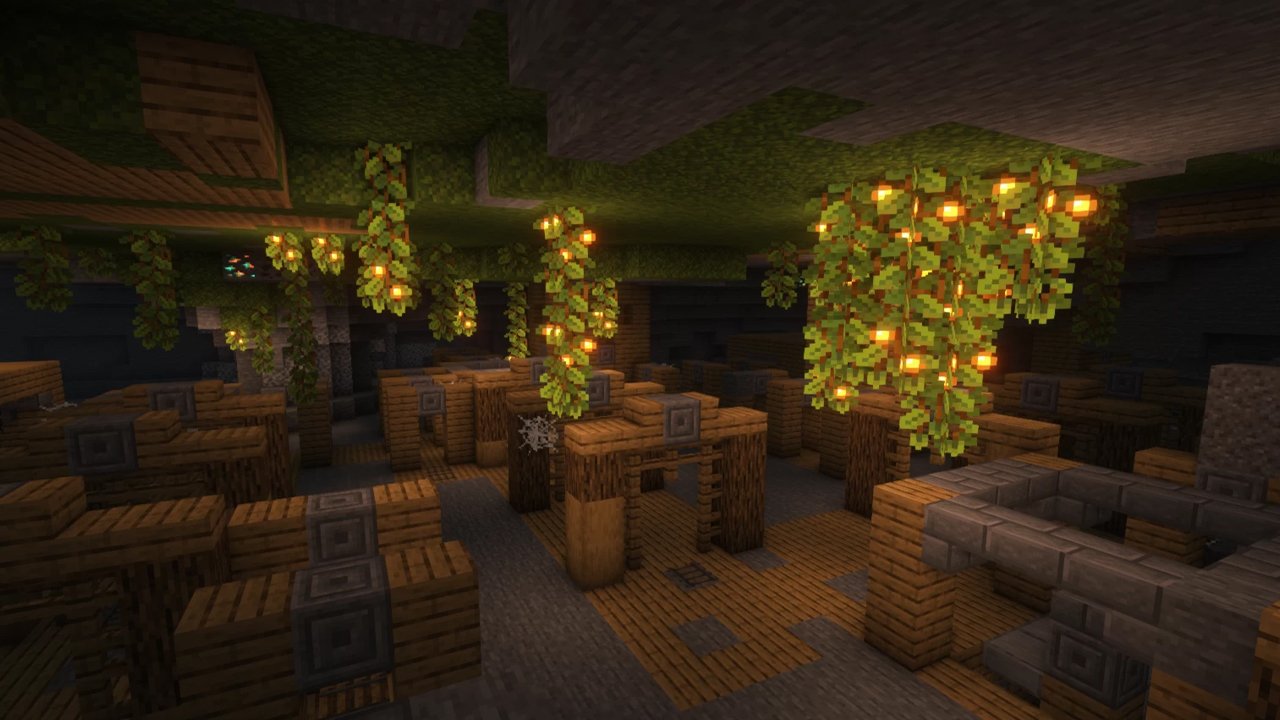 Better Mineshafts adds 3 new Mineshafts, which are made from Deepslate, Stone and Oak. There’s around 20 different room types which can spawn connected to a Mineshaft, and these are where you’ll find loot, and sometimes spawners.

Although sometimes levels of them can spawn in open-air, which can look interesting. Hopefully in the future, we see some more Mineshafts included with this Datapack. 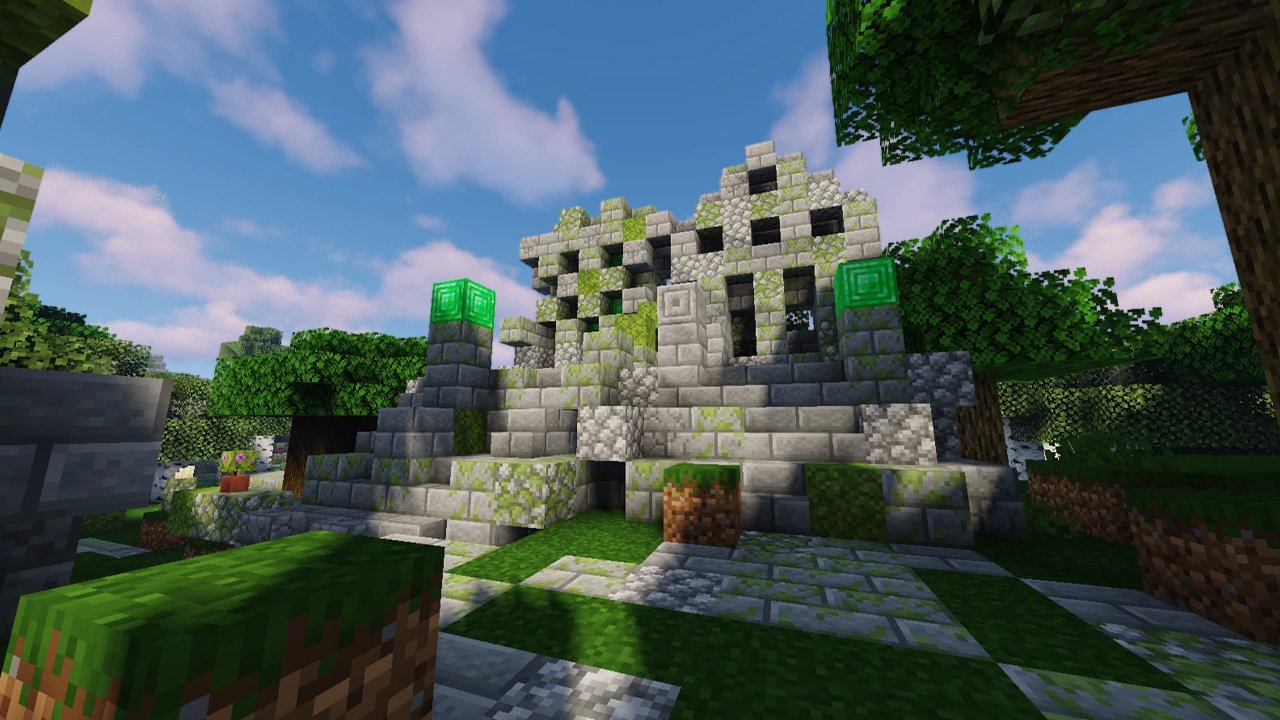 Another structure spawning Datapack is Moss Ruins. One of the locations you’ll come across most is what looks like a Ruined Nether Portal, but it’s made out of Mossy Blocks instead.

Or you can come across what looks like ruined Cities, which contain Chests and lots of loot. Every location will contain at least one Chest, and there’s also usually Emerald Blocks which can be collected for trading. 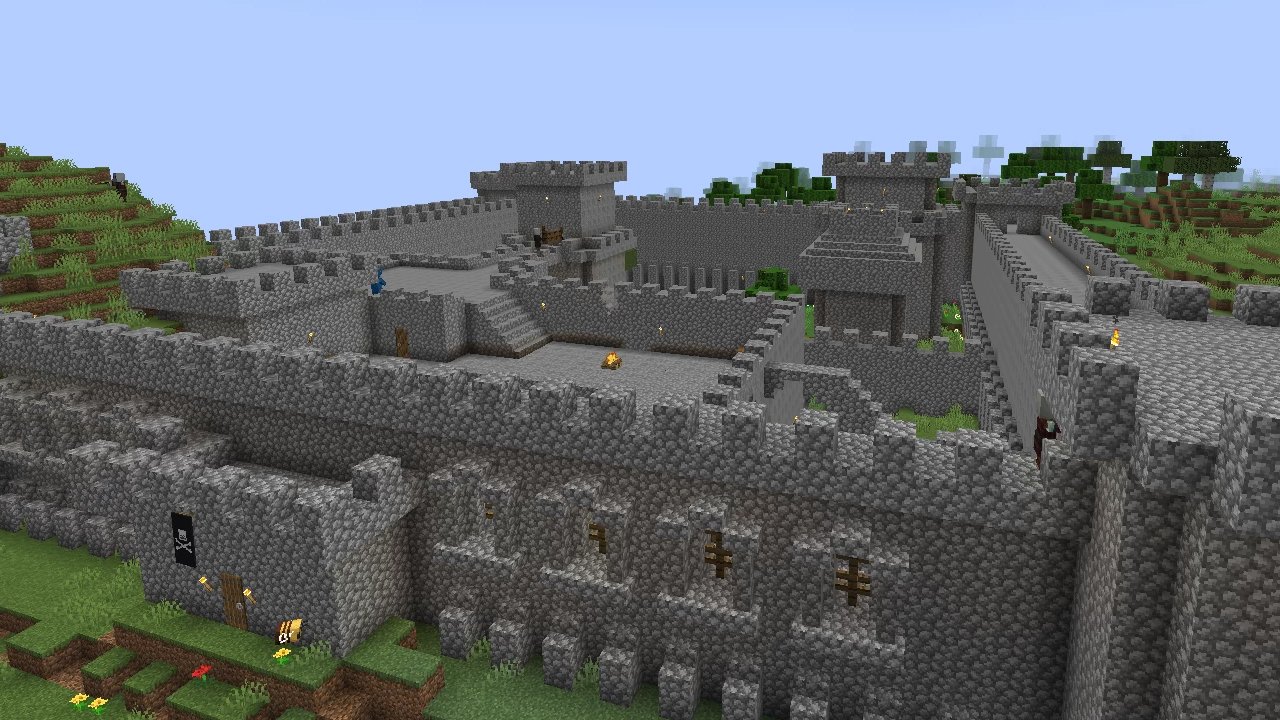 ThirtyFangs Kingdom adds lots of new structures, and more are being added with each update. The first location you might come across are these new Villages, which are made out of Bricks, and have some different variants.

The Fortress is a huge structure run by Pillagers, and contains small amounts of loot. The Glare Temple is also huge, and is indoors, with a large Azalea Forest on the roof, this is currently for decoration, but there’s still a Chest inside, which Skull Kid is guarding.

Some other structures you can find are Graveyards and Mansions, so if you’re looking for more locations to explore, check this pack out. 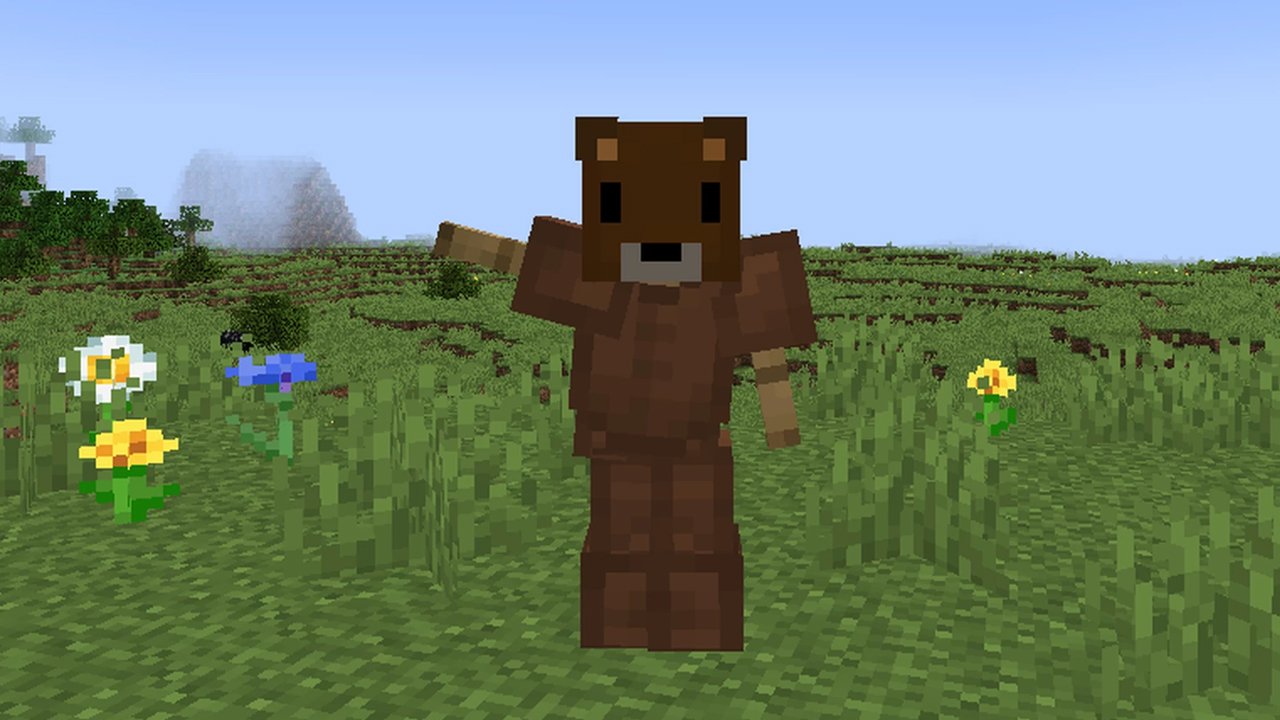 You can now unlock different Emotes after leveling up, with the Emotes Datapack installed. Each one has a level requirement, and when an Emote has been unlocked, it can be played from the chat box, or an item can be given to you, which can be placed in your off-hand slot.

Although, because this is just a Datapack, you’ll be turned into an Armor Stand during the animation, and it currently includes Wave, Point, Big Wave, Clap, Nod Head and Shake Head. 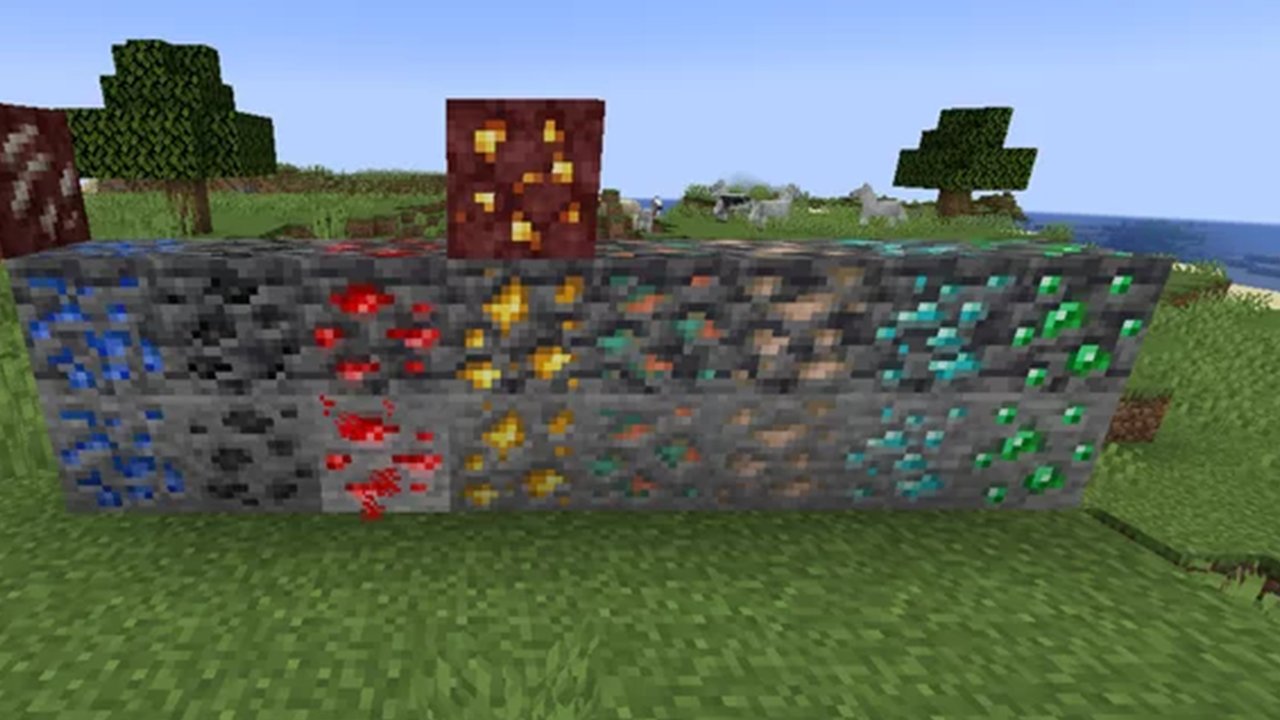 RPG Mining is a pretty fun pack. As you mine Ores, you’ll gain Mining Experience, which is separate to your normal experience, and over time, you’ll level up.

Each time you increase your Mining Level, you’ll be alerted in the chat. And for every 10 levels of Mining achieved, you’ll passively receive the Haste effect, up to a maximum of Haste 8. 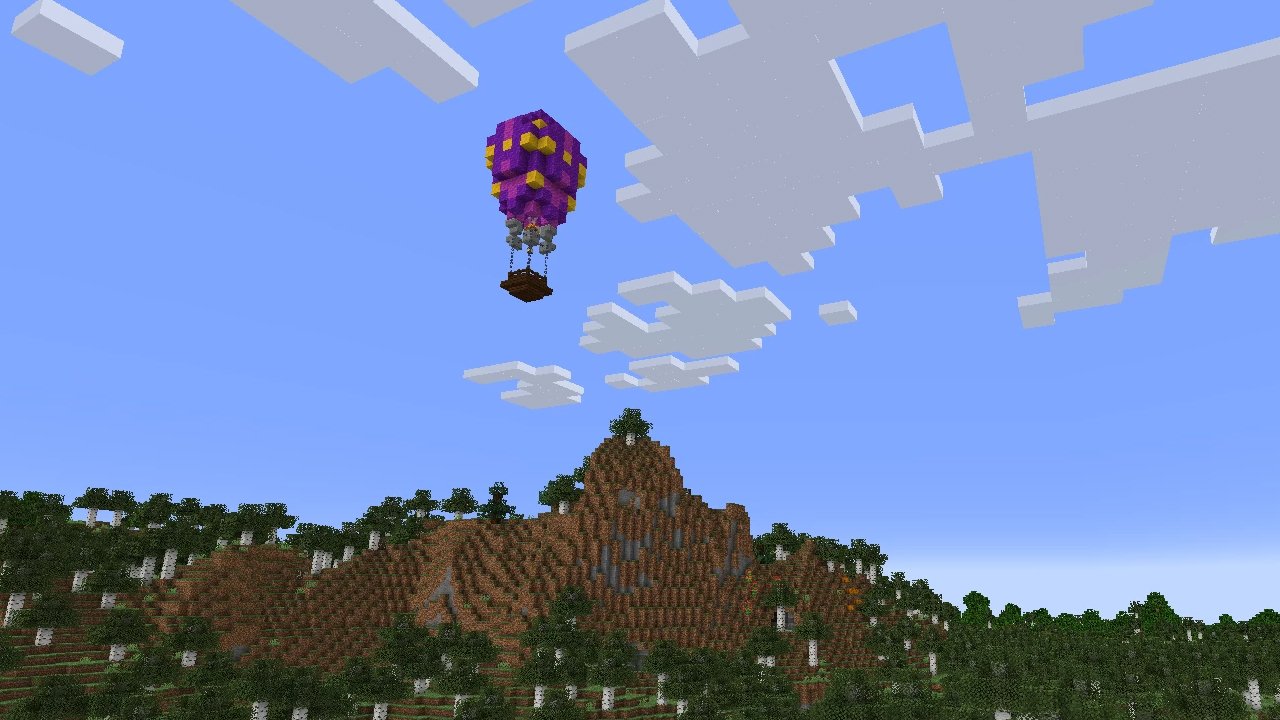 A simple structure pack is Balloons. Occasionally, you’ll come across Air Balloons floating in the sky. Right now, there’s nothing on them, although it seems the developer is hoping to add NPCs eventually. 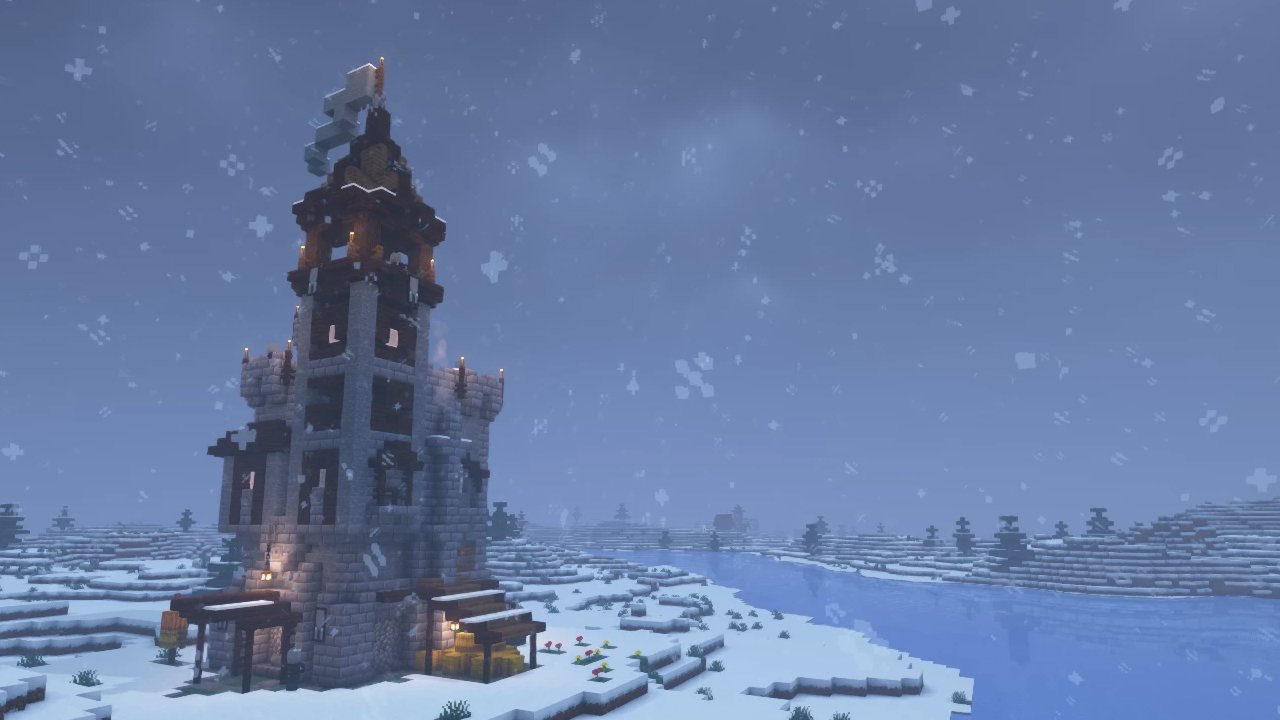 Towns and Towers, also known as More Structures in-game, is probably one of the best structure packs I’m covering in this list. The first feature is that there’s lots of Villages added for different Biomes, and the designs and structures that spawn vary a lot.

For example, on a Coastline, a Village will spawn with a Lighthouse and a Lighthouse Keeper. Whereas on the Snowy Slopes, Villagers spawn in what looks like a Ski Resort. One of my favorite changes comes to Pillager Outposts, which also have some different designs depending on their Biome.

This is something that I think should definitely be added in a future update, so that we aren’t always coming across the same Outposts. In the Ocean, you can find fleets of Ships which are owned by Villagers, or others which are run by Pillagers instead. 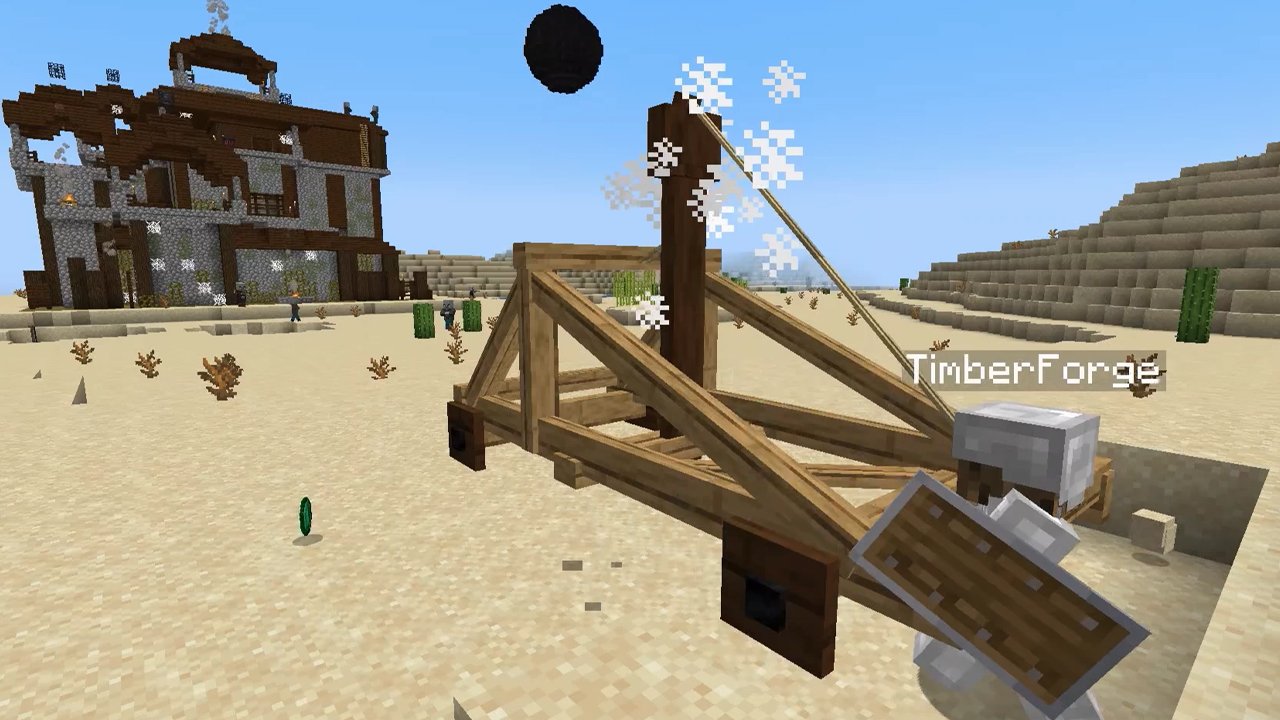 This next pack will allow you to build Catapults, and to get started, you’ll need to build the main structure out of Wood, then place down a Cauldron and drop Obsidian inside it. Then, it will be turned into a functional Catapult.

By crouching and walking, you can move the Catapult forwards and backwards, or rotate it. Punch under the scoop of the Catapult, where the launcher is to fire the Obsidian, which will explode on impact. Then you can simply throw another block of Obsidian into the center of the Catapult to reload it. 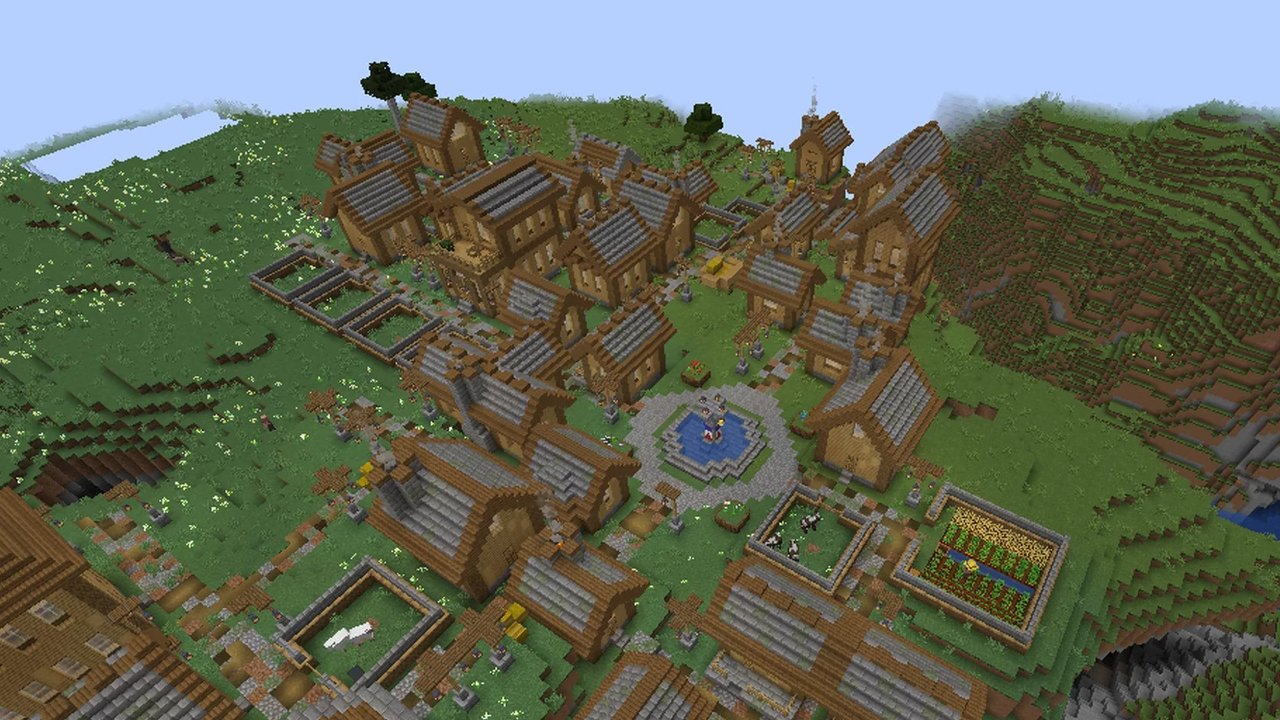 Another pack to change Villages is Overhauled Villages. The size of a Village is increased, so that they feel like small towns and cities instead. But I also like the design of them, as they have a lot more detail than Vanilla Villages, with lots of new building types also being added.

Desert Villages are much better, as they have more greenery now, and everything doesn’t blend together in the same color. Some new structures you might find in a Village are Greenhouses, Forts and Stalls. At a Snowy Village, you’ll see lots of Candy Cane too.

With these Villages being a lot bigger, there’s a lot more entities like Villagers walking around, and I do feel a slight performance hit at times. There’s also some new Pillager Outpost variants available. 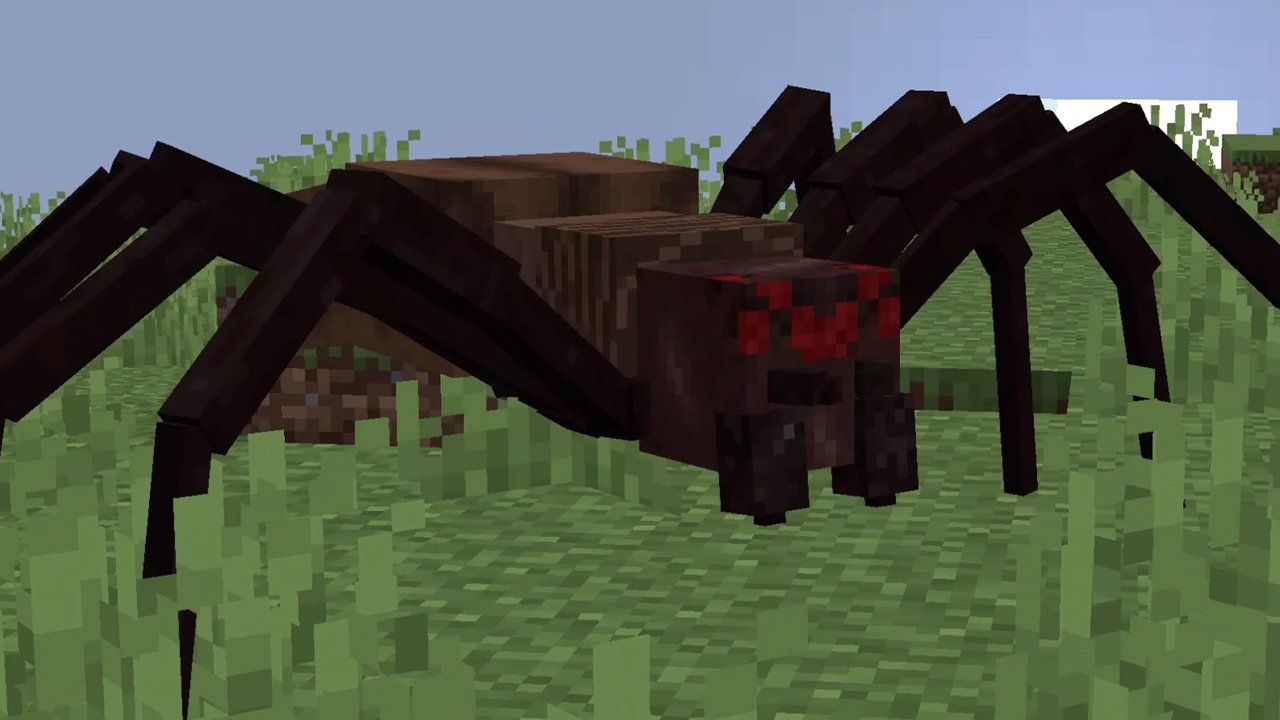 By throwing down a Sword enchanted with Bane of Arthropods 5, and 8 Spider Eyes, you can summon the Spider Queen. It will spawn alongside some Cave Spiders, who are all able to poison you, and if the Spider Queen is able to bite you, then you’ll also receive the Nausea Effect which makes the fight harder.

She has a boss bar, and is able to scream to empower nearby Spiders. It has a not so nice death animation, which you might not like if you have arachnophobia, but you’ll receive the Spider Queen Head, which will prevent Spiders from dealing damage when it’s worn on the player’s head. 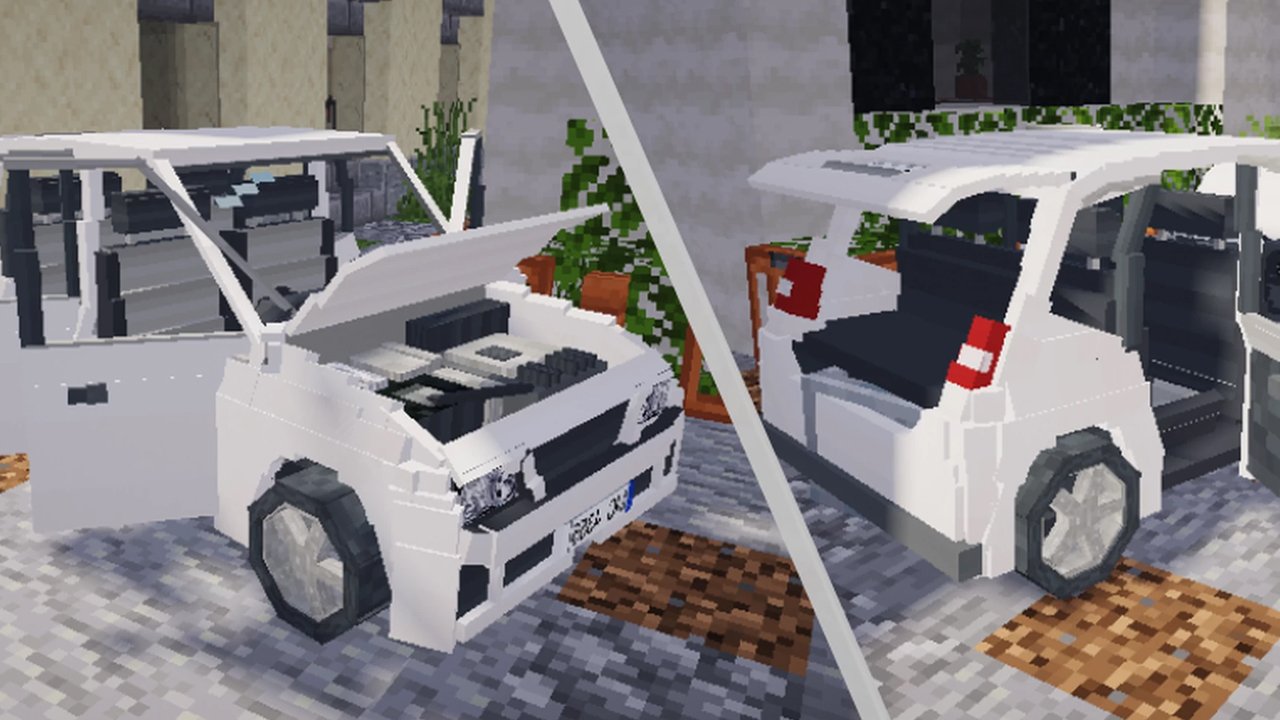 After installing the Realistic Car Pack, do the reload command to obtain some spawn eggs, but there’s also recipes available. You’ll be able to place down a Car, as well as a Gas Pump.

Driving the car is simple, you can just use the W A S and D keys to move, and it’s pretty fast. You can see your current speed, fuel and health on screen. The car itself can be interacted with, you can open doors, open the hood, change the gear shift and even turn on the headlights.

By placing down the Gas Pump, you can drive next to it and interact with it to refill your car. As the car becomes damaged, you’ll start to see the condition of the vehicle deteriorate. 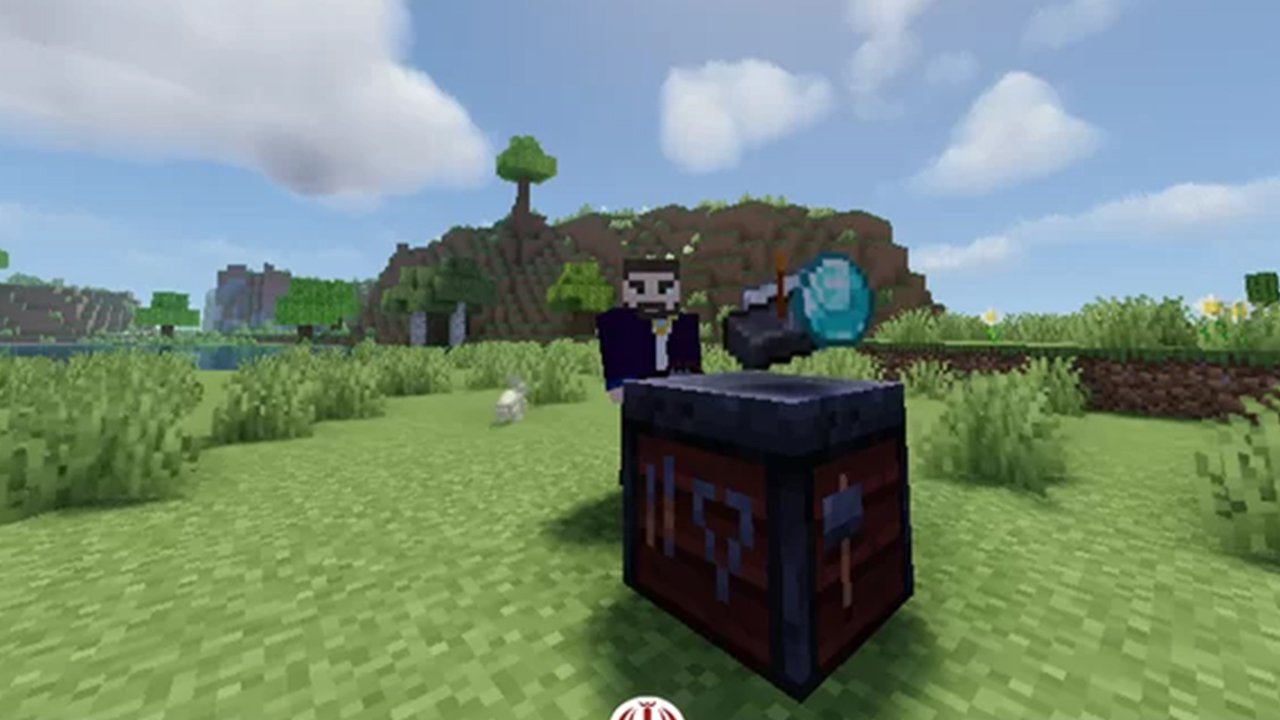 Better Upgrading Tools will make some changes to the Smithing Table. Now, you can upgrade tools and armor between all tiers. So by placing a Wood Sword inside a Smithing Table, you can continuously upgrade it between Cobblestone, Iron, Gold, Diamond and Netherite. 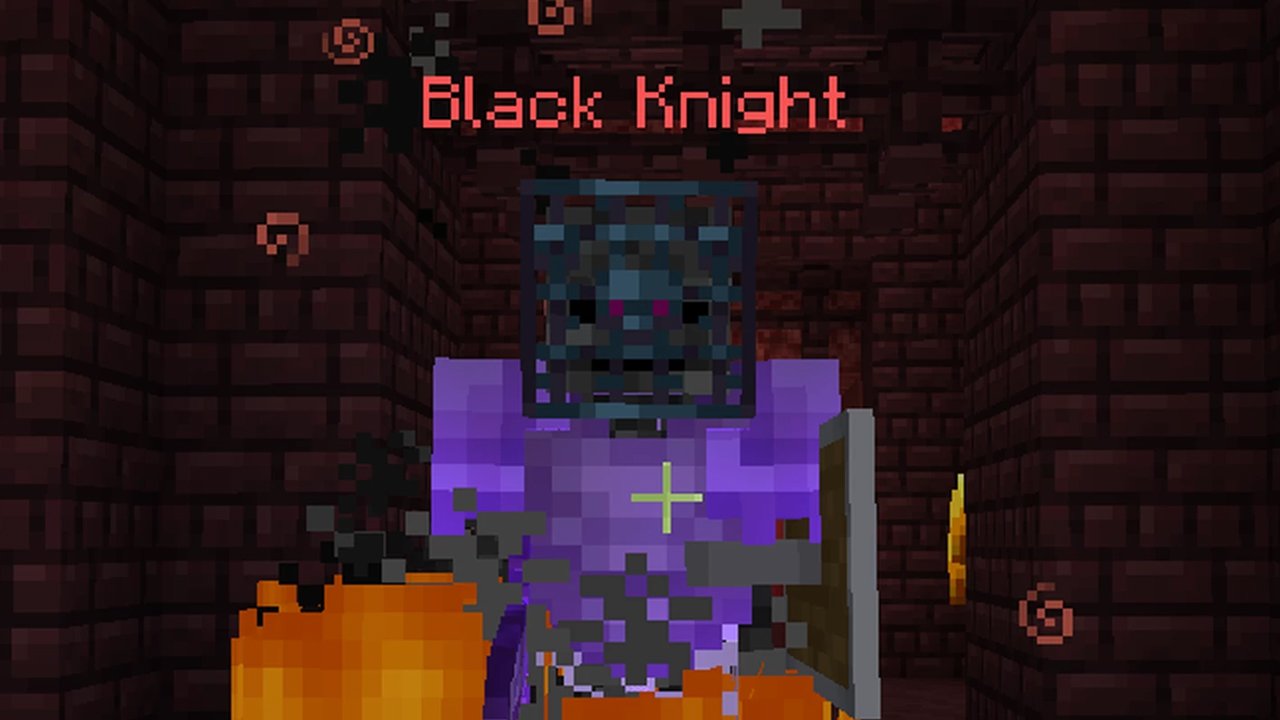 Use this Datapack to add some new mobs, which can naturally spawn in your world. It adds just over 10 new creatures, like the Bastion Guard, Water Ghost, Black Widow Spider, Ice Shooter and Barbarian.

Each of these creatures have a Rage or Anger value, and will allow them to do different skills, like a Water Ghost being able to summon Lightning, or Barbarians which can rush you. You’ll find these mobs spawning throughout all different Biomes and Dimensions. 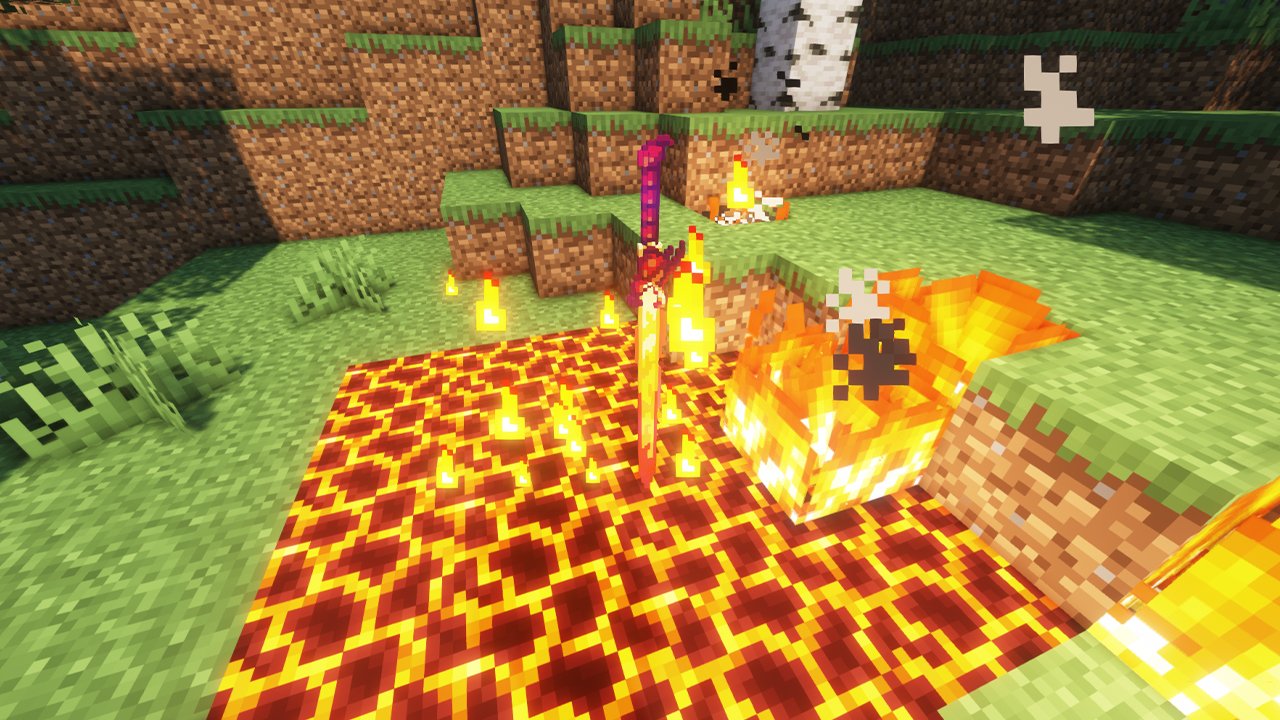 You can summon a Hellfire Sword by throwing 10 Magma Blocks, 10 Netherite Blocks and a Gold Sword on the ground. You’ll have a Mana Bar, and you can sneak and right click to consume some Mana.

The amount you use will determine the ability that is activated when you right click. You can send out Radiant Blasts, set nearby enemies on fire, or fire a Beam which will explode after a second. 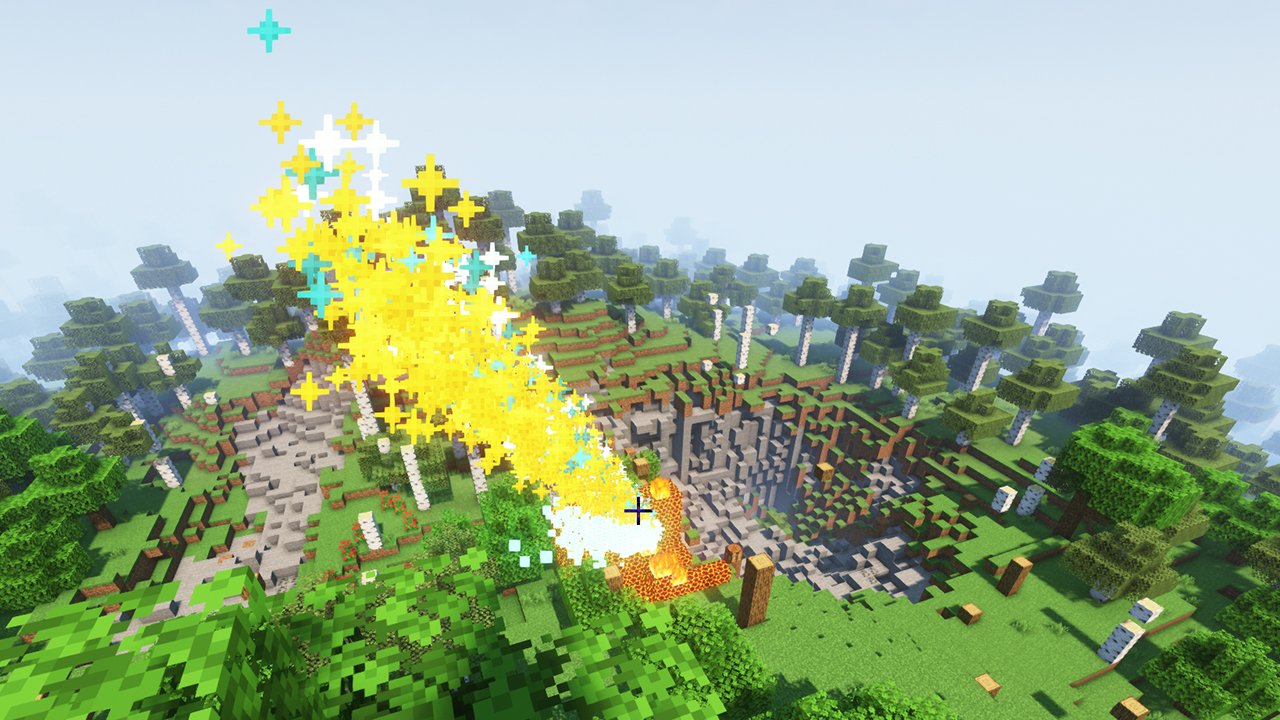 Custom Armor adds a few new armor items, which you can see the recipes for inside the Recipe Book of a Crafting Table. Some examples are the TNT Helmet, which fires explosives from your inventory.

When wearing Lightning Leggings, you can jump while sneaking to fire a bolt of Lightning. Lava Boots are going to be useful for the Nether, as you can now walk on Lava. And there’s quite a few other items, like Carrot Leggings, Chest Plates and Sword Helmets.