How to Install Fabric (and Mods) for Minecraft

Fabric is a mod launcher which is available for Minecraft, typically on the later versions. It’s popularity is rapidly growing, due to the speed at which updates are received and the performance improvements it generally provides over Forge.

This guide will cover how to install Fabric, and how to start installing mods for it. It’s great for both beginners and intermediates alike. Even though this guide was created during Minecraft 1.17, it should be the same process for all future versions.

To start, we’ll need to install Fabric, which is the tool that allows Minecraft to run with mods. Press the button below, which will take you to Fabrics official website (or click here). To start downloading Fabric, press the ‘Download Installer (Universal/Jar) button.

A .jar file will start to download, which is the installer. Open it, and you’ll see a screen similar to the image below. If it doesn’t open, make sure you have Java installed, or you can try the .exe file instead. Before progressing, make sure the Minecraft Launcher is closed! Tools like the Forge and Fabric installers won’t work if the Launcher is open already. 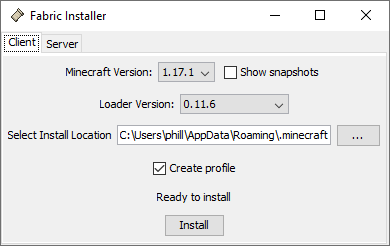 There’s two tabs at the top, with Client meaning single player, and server meaning multiplayer. Under the client tab, select the version of Minecraft that you want to install Fabric for, which is 1.17.1 in my case. Loader version can remain how it is, and you just need to make sure the ‘Select Install Location’ field points towards your Minecraft directory, which it should be by default.

When you’re ready, press the Install button. After a few seconds or minutes depending on your hardware, Fabric should be installed, and you can check if it’s done so inside the Minecraft Launcher, which you should now be opening.

In the dropdown in the bottom left corner, you should see an option for Fabric. Select it, and press the PLAY button in the launcher so that Fabric can create all the configuration and other necessary files it needs.

Minecraft should eventually load up to the main menu like it always does, but this time it’s running with Fabric. Now we can install some mods.

Before installing mods, we need to make sure Minecraft isn’t running again. One of the first mods we’ll install is Fabric API, as it’s required by most mods to function. You can download Fabric API here from CurseForge.

To download a mod from CurseForge, you can press the orange download button on the right side of the screen, under the ‘Recent Files’ section. Make sure you choose the correct version. Alternatively, you can go to the ‘Files’ tab at the top of the mod page, and download it from there.

Where to Place Mods

A .jar file will be downloaded, which is the mod. You don’t want to open this, instead, you need to head to your Minecraft installation directory. There are two easy ways to get there:

That should mean our first mod is installed, but we won’t notice any differences in-game. One mod we can try out is William Wyther’s Overhauled Overworld, which is available for Minecraft 1.16/1.17 with Fabric. Like the previous mod, download it for your version, and place it into your mods folder.

When you launch Minecraft again, start a new world. With the Overhauled Overworld mod installed, the world should look very different, with a lot of biomes being changed quite a lot.

Now, you can start installing any mods you want. Just make sure they’re for the correct version of Minecraft.

Sometimes, some mods have dependencies, which are other mods they rely on to run. On a mods page on CurseForge, you can check the relations tab at the top of the screen to see if it has any requirements. Occasionally, when you launch Minecraft with lots of mods, errors might pop up saying a mod is missing. Or you might get Error Code 0, which also means a dependency is missing.

If you’re looking for some good mods to try out, then check out the official PwrDown YouTube Channel, where we’ve covered hundreds of different mods so far.