Forge is still the most popular mod loader currently, with it being around for a long time now, and being supported by some of the best mods available. It’s an alternative to Fabric, which receives updates at a faster pace for the later versions.

Before starting, make sure Minecraft is closed, as well as the launcher. Forge won’t install properly if it’s open. Head to the Forge download page, and on the left hand side, you’ll see all the versions of Minecraft that Forge currently supports, choose your version.

Once you’ve found the version you want, press the ‘Installer’ button, which will start to download a .jar file, which you should open. If it doesn’t open, then make sure you have the latest version of Java installed. 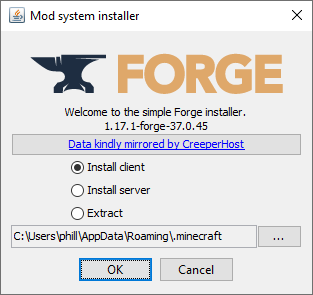 All you need to do is make sure Install Client is checked, and that the folder points to your Minecraft installation folder. When you press the OK button, Forge will begin to install, which could take a few seconds or minutes.

Once completed, open the Minecraft Launcher. In the bottom left corner is a dropdown menu, which contains your launcher profiles. Forge should now be in here. If it isn’t, then the installation didn’t work correctly, and you should try again.

Select Forge, and then press the PLAY button so that Forge can download all the necessary files it needs. Once you’re at Minecrafts home screen, exit the game.

Just like before, you need to make sure that Minecraft isn’t running, it doesn’t matter if the launcher is open.

We’re going to go ahead and install one of our first mods from CurseForge, which will be Just Enough Items, also known as JEI. It shows you every item in your game in an interface, and you can easily see their recipes, as well as the items you’re used in.

Where to Place Mods

A .jar file will be downloaded, which is the mod. You don’t want to open this, instead, you need to head to your Minecraft installation directory. There are two easy ways to get there:

This should be our first mod installed. Open up a world, or create a new one. In your inventory, you should see an interface on the right hand side showing all the items in your game. If you can’t see it, then try holding down CTRL and pressing the O key. You have hover over an item and press R to see its recipe, or U to see what that item is used in.

Now, you can start installing any mods you want. Just make sure they’re for the correct version of Minecraft.

Sometimes, some mods have dependencies, which are other mods they rely on to run. On a mods page on CurseForge, you can check the relations tab at the top of the screen to see if it has any requirements. Occasionally, when you launch Minecraft with lots of mods, errors might pop up saying a mod is missing. Or you might get Error Code 0, which also means a dependency is missing.

If you’re looking for some good mods to try out, then check out the official PwrDown YouTube Channel, where we’ve covered hundreds of different mods so far.

How to Install Fabric (and Mods) for Minecraft